Was David Cameron’s reaction the Leveson report any great surprise? One of the starting points of the inquiry was the concern that politicians – including Cameron himself – had got “too close” to the press. Forecasting that he would side with the press interest rather than the public interest took no great insight. And it looks like we’re heading that way. One might argue that this is simply one further illustration of the problem in question. 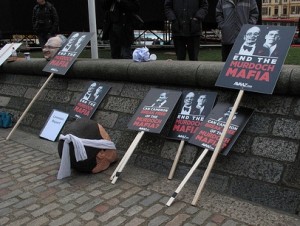 The response from parts of the press was similarly predictable, on at least two levels. First, it was predictable that the papers, particularly those who came closer to Lord Justice Leveson’s attention, would come out strongly, and pre-emptively, against statutory regulation. It’s the thin end of the wedge. It opens the door to totalitarianism. Type of thing. Second, it was predictable that the way in which they would portray Leveson’s proposals would in no sense represent fair reporting. One might, yet again, argue that this is a further illustration of the problem in question.

All “thin end of the wedge” arguments should, as far as I’m concerned, be dismissed out of hand. Whether or not the Leveson recommendations are implemented will make no difference to any future clampdown on the free press, if we were foolish enough to elect a totalitarian government.

And it would, in any case, be a peculiar state of affairs if we were to afford the views of perpetrators pride of place in determining our future strategy for dealing with their crimes and misdemeanours.

The liberals online and on my timeline seem seriously divided in their response to Leveson.

There are those who give primacy to freedom of speech and freedom of the press over every other consideration. Any form of increased state activism is undesirable and to be deprecated. The argument here is that the provisions of the existing criminal and civil law are sufficient to deal with the problem, if only they were enforced adequately.

Some have not offered any view on how enforcement is to be improved, given that it has been pitiful up until now and, on the criminal side, the overly close relationship between the Police and the press was part of the problem. Others take a more subtle position. They recognise that there are serious problems with access to justice. Existing tools are only going to be truly effective if these problems are addressed.

Other avowed liberals appear to be taking a rather different position. They are arguing that we need to differentiate the right to freedom of speech for the individual, which should indeed be sacrosanct, and the freedom of the press. A thriving liberal democracy requires plurality and the dispersal of power. Failure to regulate the press in any meaningful way simply gives free rein to a small number of powerful individuals to pursue their own political agendas in a largely unaccountable way. To equate that situation with a “free press” that by definition serves the public interest would be a profound error. The freedom of the press cannot be unconditional.

Quite a bit of the media commentary seems to me to be tilting at windmills. There has been outrage that state regulation of the press is being proposed. This only makes sense if you treat any legislative measure as, by definition, a form of direct statutory regulation, which is bizarre. Or you assume that the distinction that Leveson draws between statutory regulation and a statutory underpinning for independent regulation is a distinction without a difference, which suggests that Leveson was wasting a lot of words for no good reason.

Quite a bit of media ire has been directed at Leveson’s suggestion that Ofcom might act as a backstop regulator. This is taken to signal de facto statutory regulation by political appointees. To focus on this passage of the report as key to its argument is odd, given that Leveson explicitly says that he makes no recommendation on this point and he doesn’t favour the situation being described. He is giving a view on what might happen if self-regulation fails.

In fact, it is better to let Leveson speak for himself on the purpose of the legislation he proposes:

71. It is worth being clear what this legislation would not do. The legislation would not establish a body to regulate the press: it would be up to the press to come forward with their own body that meets the criteria laid down. The legislation would not give any rights to Parliament, to the Government, or to any regulatory (or other) body to prevent newspapers from publishing any material whatsoever. Nor would it give any rights to these entities to require newspapers to publish any material except insofar as it would require the recognised self-regulatory body to have the power to direct the placement and prominence of corrections and apologies in respect of information found, by that body, to require them.

72. What would the legislation achieve? Three things. First, it would enshrine, for the first time, a legal duty on the Government to protect the freedom of the press. Second, it would provide an independent process to recognise the new self-regulatory body and reassure the public that the basic requirements of independence and effectiveness were met and continue to be met; in the Report, I recommend that this is done by Ofcom. Third, by recognising the new body, it would validate its standards code and the arbitral system sufficient to justify the benefits in law that would flow to those who subscribed; these could relate to data protection and the approach of the court to various issues concerning acceptable practice, in addition to costs consequences if appropriate alternative dispute resolution is available.

73. Despite what will be said about these recommendations by those who oppose them, this is not, and cannot be characterised as, statutory regulation of the press. What is proposed here is independent regulation of the press organised by the press, with a statutory verification process to ensure that the required levels of independence and effectiveness are met by the system in order for publishers to take advantage of the benefits arising as a result of membership.

It’s a bit wordy, perhaps. But it’s pretty clear. Ofcom is mentioned again here as playing a role, but that is a point of detail that could be worked on. If there is concern that placing Ofcom in this role is too close to statutory regulation then I have little doubt that a structure embedding more independence could be developed.

It seems to me that Leveson bends over backwards to push for a self-regulatory system. But he faces two well-known challenges that all regulatory designers face.

First, we know that those most likely to participate willingly in any form of regulatory scheme – be it licensing, accreditation, being bound by codes of practice, or joining trade associations – are the ones that least need it. They’re the good guys. It’s those whose performance is most in need of improvement – the rogue landlord, the bodging builder, dodgy fast food van, or newspaper editor who will go to any lengths to get that exclusive – who are least likely to sign up willingly.

The regulatory literature talks in terms of models of enforced self-regulation, which is what we proposed for private landlords when I was at the Law Commission. But that still faces a compliance problem – finding and sanctioning those who refuse to join one or other self-regulatory organisation. Leveson tries a different route. To tackle this compliance problem he proposes quite an ingenious attempt to structure the incentives in favour of joining a self-regulatory scheme. But to deliver this would require legislation.

Second, we know that schemes that rely upon self-regulation tend to be perceived to be – and in some cases are – soft on those who offend. They tend to put the industries’ interests and protecting one of your own over the interests of the public. The existing PCC clearly suffers from this problem. So Leveson places quite a lot of emphasis not only upon the independence of the PCC’s successor from politicians but also from the industry. And he, rightly, diagnoses that independence should not only be a reality of practice but also be something that is capable of verification if it is to sustain public confidence in regulation. And for that he suggests there needs to be statutory underpinning not for the substance of the regulation but for the structures.

The final point that struck me is that a lot of the fevered debate over the last few days relies upon keeping the whole issue very parochial. As a number of people have pointed out, if you look beyond our shores you’ll find thriving democracies with a robust free press operating under systems not unlike the one Leveson proposes. Leveson’s proposals could be seen as an elaboration of the system in Ireland. And, as Paul Walter reminded us the other day, Finland has a statutory framework underpinning the operation of its press and its press is routinely rated as one of the freest in the world. It all depends on the detail.

We have to hope that the short term political gameplaying doesn’t kill this chance to reform the press. Leveson notes that his inquiry is the seventh on broadly the same topic in 70 years. Political will failed on six previous occasions. It would be tragic if Leveson’s proposals weren’t at least given serious and open-minded consideration. That will take a while. Neither rapid rejection nor rapid endorsement – a la Mr Miliband – are sensible initial responses.

But at first sight Lord Justice Leveson appears to have come up with proposals that are as liberal as they can be, while seeking to effect genuine rather than cosmetic change.