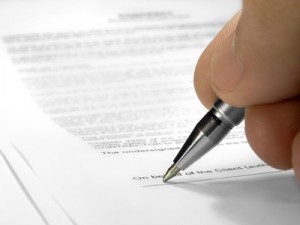 It appears that Selby District Council has restructured its whole organisation into a small group of commissioners – a core group of 14 staff – and a multifunctional provider organisation – Access Selby. We move a step nearer to realising Nicholas Ridley’s vision of the Enabling Authority. We’re taking the idea of the firm as a nexus of contracts to its illogical conclusion.

All we need now is for Access Selby to receive an offer it can’t refuse from an external commercial body and we’re there. As and when that happens, it would be a reasonable bet that the commercial body is going to be one of the large multinational public service contractors.

In the BBC news reports discussing this item today a question of democracy was posed. Doesn’t the separation of commissioning from provision in this way undermine the very idea of a locally-elected body providing services in response to the wishes of the local electorate?

The response from the council’s Chief Executive was emphatic:

No. Democracy remains. The level of services is still in the control of the locally-elected body.

Services are provided under contract and, of course, a contract can be varied, at a price.

This seems a monumentally simplistic reading of how the situation is likely to play out. Obviously, a news item can only say a limited amount. But it appears little learning from previous experiments with purchaser provider splits is in evidence. There seems to be very little understanding of the nature of transaction costs, asymmetric information, or principal-agent problems. There seems little understanding of the arguments that where objectives are multiple, vague and changing – which is pretty much the definition of the situation facing a local authority – you are in precisely the environment where locking yourself in to long term contracts is a bad idea. They are too rigidly specified and so the costs of renegotiation accumulate. Or they are too vague and open-ended in which case it is not possible to monitor contract compliance effectively. You could rely on spot contracts instead. That gives short term flexibility, but comes with much higher transaction costs.

The arrangement also privileges service provision over democratic deliberation. In doing so it risks eviscerating the idea the local authority.

It would be interesting to know whether local politicians were quite so sanguine about the strength of democratic oversight and accountability in this brave new world.