What determines the size and location of the Overton window? What types of proposals for government action are viewed as acceptable or sensible? Which proposals are viewed as popular enough to make their way into 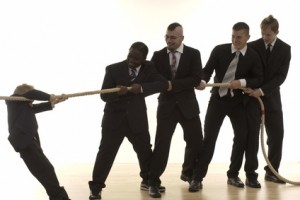 One answer is “public opinion”. A more sophisticated answer is public opinion as mediated to politicians through a range of focus groups, political advisors or media representations. Clearly there is plenty of scope for a gap to open up between these two versions of public opinion.

Looked at from the other direction, public opinion is itself a product of similar forces, in particular media representations and debate.

We are used to the argument that the print media, with a couple of exceptions, provides a blue-tinged view of the world, resting as it does in the hands of Murdoch, Desmond et al. Until recently we have typically worked on the assumption that broadcast journalism is more even-handed. But this view seems increasingly untenable. The rabid right still sees the BBC as a bastion of communism, but that is far from the truth. And increasingly we’re drawn to the conclusion that the BBC aren’t necessarily always trying for balance.

Last night’s episode of Newsnight led me to reflect upon this, particularly as it came shortly after a particularly supine performance by Andrew Marr in his interview with Andrew Lansley on Sunday morning.

Newsnight’s discussion of the Beecroft report – which is clearly a right-wing supply-siders fantasy come true – was conducted by Jeremy Paxman. It featured an avowedly right wing Tory MP, an American of slightly more moderate views, Lord Oakeshott, and the economist David Blanchflower. Lord Oakeshott is, as we know, St Vincent’s representative on earth, but he’s hardly a diehard left-winger. Professor Blanchflower has made it abundantly clear through a range of outlets – including most recently on Twitter as @D_Blanchflower – that he strongly disagrees with the thrust of Government policy.

But where was the Labour representative? Not for the first time in recent weeks they were not there to participate in the debate. Was Professor Blanchflower sent in to bat because the Labour front bench thought he could do a better job of it than they could? If so, then there is a risk that the public forms a view that nominally left-wing politicians have nothing to contribute to the debate: that the views typically associated with ‘the left’ are not reasonable or acceptable enough even to be given an airing.

The Newsnight discussion follows the launch earlier in the day of the 2020 Tax Commission’s final report The Single Income Tax. This egregious publication was given a generous amount of airtime during the morning news programmes. No matter that the report is the product of The Taxpayers’ Alliance, one of the most inaptly named organisations ever to exist, and therefore by definition an attempt to provide some veneer of respectability to a pressure group zealous for small-state neoliberalism. No matter that it contains a strange admixture of arguments from economics, religion, morality and evolutionary psychology. No matter that its flat tax proposals are the sort of flat earth economics that does nothing other than line the pockets of the rich to the detriment of the poor. No matter. It still gets an airing. Perhaps it is the imprimatur of the Institute of Directors that made the difference.

And giving it an airing lends a degree of credibility to the arguments. After all, if this were the sort of unthinkable nonsense dreamt up by right wing cranks then surely it wouldn’t be featuring so prominently on serious news programmes? The audience may not understand the economics of it, but it must be serious stuff if it is getting this sort of exposure.

So where are the think tanks and political parties making the opposite case? The Labour party would appear too closely wedded to fiscal conservatism at the moment to present a clear alternative. The alternative might be to argue that the problem is not that tax burdens are high in any objective sense, but that the discourse that claims they are punitively high goes unchallenged. Where are the people arguing that the real problem in this country is low tax morale? Or that greed and self-interest have come to dominate thinking to such an extent that we have lost sight of the fact that “individual” success is as dependent upon social context as it is on positive individual attributes? And that public services and public infrastructure are crucial to shaping that social context. Or arguing that we have lost sight of the key benefit of collective provision through social insurance, namely, that it is generally cheaper?

The only time ‘the public’ are likely to encounter robust arguments of this type on television is when someone like Mark Serwotka, Leanne Wood or Owen Jones appears on Question Time. And how many ordinary members of the public – rather than politics junkies – watch Question Time?

The net result is that such arguments are not seen as integral to contemporary political discourse. Rather they are seen as fringe views or anachronistic. And news presenters and interviewers routinely challenge them as untenable, self-interested or past their sell-by date. They are challenged in a way that casual empiricism suggests the decidedly fringe views of The Taxpayers’ Alliance and its ilk are less likely to be.

I don’t necessarily agree with those who continue to cleave to genuinely socialist views. But without such views being routinely represented as part of mainstream political debate public opinion continues to drift to the right. And the Overton window follows it. Policies that were sensible and popular 30 years ago become literally unthinkable. Policies that were not simply radical but unthinkable thirty years ago are now treated as self-evidently true. And policy is increasingly made in the service of the few, to the detriment of the many.

If I were a Marxist I might consider invoking the notion of false consciousness. But I’m not. So I won’t.