The fierce urgency of now 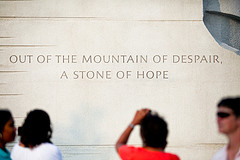 Yesterday was the 50th anniversary of Martin Luther King’s “I have a dream” speech, which is deemed by many to be the greatest speech of twentieth century American political history. The BBC has produced a number of special programmes examining its content, context and consequences. Many people are reflecting on its significance. I particularly enjoyed Alex Wilcock’s post on the speech.

The speech itself is highly allusive and intertextual, drawing heavily not only on American history but also King’s training as a Baptist preacher. It would be interesting to explore how many people today would recognise these references. The speech is self-consciously rhetorically sophisticated. It uses a range of classical rhetorical techniques to gain its powerful effects.

On Twitter yesterday someone asked which contemporary politicians produce speeches of similar significance and with similar power to inspire. I think we know the answer to that is few, if any. Obama is the only high-profile politician I can think of who has returned to something similar in rhetorical style, but even his speeches are rather more straightforward in content. And he is notable because he is unusual.

We are in a period when the appropriate approach to a political speech is deemed to be one in which the speaker seeks to reach out to the audience through identification. They are just one of us, casually sharing their thought as if they were chatting with friends down the pub. Performing without notes or autocue, shedding jacket – and possibly even tie! – are supposed to indicate this isn’t a piece of stagey rhetoric designed to persuade. Even though that is, of course, precisely what it is trying to do. There are obligatory references to people spoken to in the street or the concerns of a particular constituent, or to letters received highlighting particular difficulties or injustices that we must respond to. All designed to signal “We understand. We’re down there with you”. King used similar tactics to bridge between his points about broad societal change and its impact on the ground, but in his case it comes across as authentic. Whereas, in the case of many modern politicians, it typically comes across as inauthentic rhetorical-strategy-by-numbers.

In fact, King uses this strategy to great effect in one of his other great speeches – “I have been to the mountaintop”. He refers to a letter that he received from a little girl while in hospital and uses it as a springboard for a piece of rhetorical genius based around the motif “If I had sneezed”. I think for raw power and emotional intensity the latter part of the “I have been to the mountaintop” speech is more effective that “I have a dream”. If you have never listened to it then you can find it here.

In last 5 minutes King explains his indifference to his fate. He knows he may never reach the destination they have been striving for all these years, but that’s ok, because he has already seen the promised land. It is hugely moving. And that is even before you add the poignancy of knowing that he was assassinated the next day. If you watch the film of that passage you get the clear sense he knew it – or at least something – was coming.

The first time I listened to the speech was on platform 3 at Cardiff Central station while waiting for a train. And it’s a bit awkward to be moved close to tears while trying to board the 19.52 to Swansea.

My title – the fierce urgency of now – is a quote from King’s “I have a dream” speech. It is one of the incidental gems embedded in the text. I use it because I was wondering.

King’s speech was made as part of the March on Washington for Jobs and Freedom. Freedom: in the context of 1960s American that was something of profound significance. The March was viewed with great concern by the powers-that-be. We have seen similar uprisings in recent years across the Middle East, as oppressed people’s demand rights and freedoms. The jury is still out on where that process will end up.

But what about freedoms being lost rather than freedoms to be won? Where is the articulate and broad-based resistance to encroachment and infringement upon freedoms? Where is the genuine outrage in the face of rights being curtailed or removed? Rights that were hard-won by our predecessors. I was wondering this as I’ve been trying to get to grips with the implications of the Coalition’s lobbying bill. Despite rather implausible Ministerial protestations to the contrary the bill, as currently drafted, is going to provide a weapon for the state to curtail all sorts of organisations from voicing all sorts of legitimate concerns, stifle vibrant public debate, and diminish civil society. Those most directly concerned have spotted this.

But these steady encroachments, frequently in the name of a higher but non-specific good, are not being vigorously contested. Indeed, the majority would seem often to conspire in their own increased constraint.

To defend freedoms requires a much more broad-based objection to the seemingly inexorable expansion of state control. And maybe that needs a champion as eloquent, and brave, as MLK to articulate what is at stake.