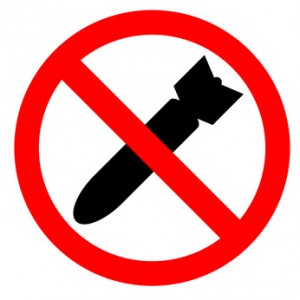 Syria has been preoccupying the mainstream media and the political blogosphere for several days now. I’ve not blogged about it because I try to stick to things I know something about.

I know very little about Syria. Other than it is an awful situation. And awfully complicated. Clearly, the Syrian government has inflicted some truly unspeakable acts of violence upon the Syrian people. These may or may not have involved the use of chemical weapons. It seems likely that they did. Chemical weapons are horrendous. But even if they weren’t used it is clear that some dreadful crimes have been perpetrated. I’ve never entirely understood why chemical weapons, specifically, are a trigger for intervention. Is killing the same number of people by more conventional means less unacceptable?

The desire to intervene to stop such human suffering is only natural. It is a sign that simple human empathy is still alive.

But how to intervene effectively?

David Cameron’s government aligned itself – in traditional fashion – with the US, in favour of military action. A relatively swift move towards war seemed almost inevitable.

It wasn’t entirely clear what the objectives of such a military action would be, if regime change had been ruled out because it is geopolitically too problematic. It wasn’t entirely clear whether the ‘international community’ was ever going to wholeheartedly back intervention. Or rather it was fairly clear that it wasn’t. Intervention in Syria could have made the situation worse and escalate tensions across the Middle East. So was the Government proposing to take the country into another war of dubious legality? And once the war was joined, how long would the country be entangled in it?

Yet, yesterday’s historic vote in the House of Commons renders these questions moot. It has stalled the move towards military intervention, at least temporarily.

Much of the initial reaction to the vote has been directed at the domestic fallout. What is the impact on Cameron’s leadership? Will the Government fall? What does it mean for the balance of power between the executive and the legislature? Is it all Tony Blair’s fault because the lies told over Iraq have shaken belief in the credibility of any case for intervention? Is it a great day for Parliamentary democracy or should MPs be hanging their heads in shame? Is this a sign that Britain is rejecting the role as the world’s policeman, that it has sought to fulfil for many decades? Is it the end of liberal interventionism? Will this failure to act lead to a future in which more dictators are confident they can engage, with impunity, in ever more unspeakable acts against their peoples?

There have been musings on the implications for the “special relationship”. Is it so special any more? Will the US go it alone or ally with France and others to take military action anyway? Or, even more radically, might Congress follow the UK’s lead and step back from military action?

It is clear that Cameron mishandled this whole episode pretty spectacularly. To recall Parliament and lose a vote is one thing. To recall Parliament to lose a vote on going to war is quite another. I believe that no Prime Minister has lost a vote on going to war for more than a century. The ramifications of tonight’s vote for domestic and international politics will no doubt become more apparent over the coming days, weeks and months.

But that is so emphatically not the issue. There are many, many people suffering horrendously at the hands of a tyrannical regime. That has not changed just because Cameron has – or has not – lost control of his party and Miliband is – or is not – playing petty party politics.

The question remains how to intervene effectively? I sincerely hope that those who are saying that tonight’s Parliamentary developments mean we are washing our hands of the Syrian problem – to stand idly by while thousands die – are proved wrong. Just because the “solution” we have traditionally reached for has been put out of reach doesn’t mean that all efforts to alleviate suffering must be abandoned. There must surely be other avenues that can be explored. Avenues that will genuinely attract the backing of the international community without escalating geopolitical tensions.

But if I continue down that road I will start talking rubbish because foreign policy is not something I can offer a very informed opinion on. All we can hope is that, in the stead of heavy weaponry, creativity and collaboration across the international community can deliver progress towards peace.

In the face of news of such terrible suffering simply hoping for the best is inadequate. There is a compulsion to do something more useful. The only thing I could think to do sat here this evening was to make a donation to Medicins Sans Frontieres, who are working in country. The Red Cross and DEC are also fundraising to help victims of the violence in Syria.

As a response it is not much more adequate than hoping. But at least it’s something.