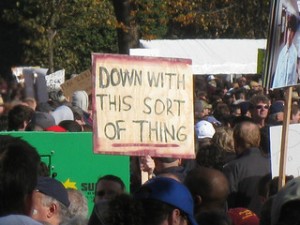 When the Coalition’s Lobbying Bill appeared in public for the first time, just before the summer recess, much attention was focused on Part I. Most critics agree that it represents an utterly feeble attempt to address the problem of corporate lobbying. Indeed, if the Bill is passed in its current form then it may well result in a smaller proportion of the relevant activities being transparent than is the case at the moment. Not only are the critics of corporate lobbying saying this, some representatives of the lobbying industry have said very similar things.

But as we move towards the Bill being reintroduced to the House next week, more attention is focusing on Part II, which addresses non-party campaigning.

The purpose of Part II is opaque.

The Government says that it is intended to stop the possibility of some of the more problematic features of the US system – such as the so-called super-PACs – developing here. That would make perfect sense, except for the fact that the structure of election law in the UK already makes that pretty much impossible. And, as Alex Runswick pointed out at Liberal Democrat Voice on Thursday, there are already much more direct ways for wealthy individuals to influence policy in the UK, including donating enough money to a party to be rewarded with a seat in the House of Lords.

An increasing number of commentators are raising the alarm that, whatever the claimed purpose of Part II, the consequence of the Bill in its current form will be to prevent campaigning by a range of charitable and voluntary sector organisations for at least the year prior to an election. Some might take the view that organisations such as Oxfam, Shelter, CPRE, the National Trust and the like shouldn’t be running political campaigns anyway. I don’t happen to agree. A campaigning organisation like Shelter wants to see poor housing circumstances improved and the most likely way to achieve that is by influencing the political process at all levels.

The Bill is currently drafted in extremely capaciously. The key section is:

“(2A) “Election campaign”, in relation to a third party, means a campaign conducted by the third party for election purposes.

In trying to get housing on the agenda Shelter will inevitably promote a position that aligns better with some parties’ political platforms and not so well with others. If it were to argue that the government should do more, while a political party says housing is something that should be left entirely to the market, then Shelter’s position could be seen as implicitly critical of the market fundamentalist party and aligned with any party suggesting the government should do more. That may influence the nature of the political parties’ electoral campaign, and the outcome of the election.

It wouldn’t matter whether Shelter’s campaign engages directly with the positions of particular parties. It doesn’t matter if it explicitly targeted specific candidates, or if it mentions or doesn’t mention any particular political party or policy. Activities that are carried out “in connection with” – a term open to very broad interpretation – “otherwise enhancing the standing of … with the electorate” – again open to broad interpretation – “in connection with future relevant elections (whether imminent or otherwise)” – again open to interpretation – will all potentially be covered. Indeed, the Coalition have also indicated that the intention of the organisation concerned is irrelevant to the assessment. Even if the activity was never intended to be part of an election campaign, if it can be construed as falling within these very broad definitions then it can be seen as constituting an election campaign.

So if the activities of an organisation were deemed to constitute an election campaign what follows? It means the amount that can be spent on the campaign becomes tightly controlled. The Bill extends the types of expenditure that must be counted as controlled expenditure (in Schedule 8A) so that non-party campaigning is subject to more stringent rules than party campaign. In particular, staff time has to be counted towards the limit – which political parties have always claimed is too difficult for them to do. It means the organisation will become subject to increased bureaucratic burden in accounting for the money they spend.

But perhaps the most perverse element of the Bill, as currently structured, is that if an organisation’s activities are deemed to be promoting one political party’s position rather than another then the expenditures it incurs will count towards that political party’s election campaign. So we could end up in the situation where an independent charity will need to be seeking David Cameron, or Ed Miliband, or Nick Clegg’s permission to run a campaign because it could be construed as supporting the position of their party.

It is hard, as the Electoral Commission has pointed out, to think what sort of activities, viewed from a particular direction, are not potentially covered by this Bill. The Electoral Commission would be given a wide discretion to decide what was in and what was out. This is a discretion they have signalled they don’t want. The breadth and vagueness of the definitions of what constitutes relevant activities mean the scope for inadvertently breaking the rules seems considerable. When there are criminal sanctions associated with breaching the limits on controlled expenditure, even inadvertently, this is unacceptably arbitrary.

It may be that the only way to avoid the risk of being touched by the provisions of this Bill would be to stay completely silent in public. And that is what many civil society organisations fear.

The Bill is so broadly and badly drafted that it could have a dramatic chilling effect on civil society debate around the most important contemporary social issues. It will act as a constraint on free speech. It has been suggested that it may breach Article 10 of the Human Rights Act.

As formal representative politics becomes more and more of a minority sport, people are increasingly joining and supporting single purpose charitable and voluntary organisations that speak more directly to their own particular interests and concerns. Many of the campaigning charitable organisations dwarf political parties in the broad base of their grassroots support. In that sense their legitimacy to speak on their topics of concern is just as great, if not greater, than political parties. Such organisations are no doubt often viewed as a nuisance by political parties. But the idea that because party politics is failing it should seek to curtail other mechanisms by which people express their concerns is perverse. If we think there is a problem then the focus should surely be on revitalising politics, not constraining civil society.

The Coalition – in the form of Chloe Smith and Tom Brake – have dismissed these fears as alarmist. But to raise the alarm is not to be alarmist. The Government’s intentions for this part of the Bill are by no means clear. But in any case their intentions are not entirely determinative of its impacts and consequences. The wording, as currently drafted, could be interpreted precisely as the NCVO and others fear (including regulating the political blogosphere). It could be used by political parties to stifle criticism and dissent. It is fundamentally illiberal.

If the government don’t intend it to have those effects then they need to revise the Bill heavily to make it crystal clear that the possibility is ruled out. Too much recent legislation is badly drafted, allowing too much room for discretion and interpretation. Through the injection of such ambiguity the power of the state to enroach upon and manage society is gradually enhanced. That is why constant vigilance is required.

No liberal should need to be told that. Frankly, with the Liberal Democrats in government it is hard to fathom how this Bill can be brought forward in its current form.