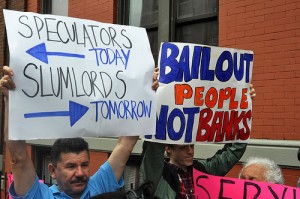 For a long time we have thought of the private rented sector as the most disorganised part of the housing market. Most properties were let by small landlords who owned one or two properties. Very few landlords belonged to any form of trade association, although around half let their properties through letting agents. On the demand side, most tenants held six month tenancies and many tended to be young, mobile and poor. Quite a lot of tenants lacked familiarity with their rights or the incentive to enforce them, particularly in the absence of any legal barrier to retaliatory eviction. A few localities had established groupings of private tenants, but such organisations were most notable for their rarity. Information was relatively sparse and circulated with difficulty: so reputation effects, on either side of the market, were weak.

These characteristics present considerable regulatory challenges. The levers for enforcing rights and obligations are weak. The consumerist model is most inadequate in precisely those subsectors of the market where rights are most likely to be violated. Command and control regulation around standards relied upon local authorities for enforcement, and this function was perennially under-resourced.

Yet we are witnessing a reconfiguration of the landscape of private renting that has the potential to completely transform the nature of the game.

The growth of the private rented sector is probably the most notable change in the housing market over the last decade. Alongside numerical growth we have seen a change in the sector’s composition. The increasing numbers of families living in the sector for more extended periods of time has put pressure on the government to improve the terms upon which rented property is occupied. Hence we have seen recent announcements from CLG regarding the scope for increased use of longer tenancy agreements.

On the supply side we are seeing more concerted policy pursuit of institutional investment than has previously been the case. And institutional finance is linking up with management by registered providers to provide private landlordism of a larger scale. This sort of configuration means that landlords providing market rented housing will, if nothing else, be plugged in to some well-established networks.

So you could argue that the supply side is on its way to becoming more organised.

But perhaps the most interesting parts of the picture are the regulatory possibilities that are opening up for organisation among tenants. Longer term residence in the private rented sector changes the incentives facing tenants to enforce rights. More families living in private renting means a greater number of older adults looking for settled accommodation, with greater incentive to ensure their accommodation is satisfactory.

The Observer carried a piece today entitled Landlords and agents in the line of fire as tenants launch fightback. That title is rather overblown, given that much of the article is just a restatement of some of the basic legal rights of tenants. But it does offer several examples of tenant organisations that are emerging. Some of them are locally focused, but some have national aspirations. And local organisations are linking up to form broader coalitions.

A further key part of this story is the role of social media in reducing the barriers to organisation and information dissemination. One of the long-standing problems in regulating renting has been a lack of appropriately low cost ways of identifying members of a fluid and transient tenant population. Now through liking Facebook pages or engaging with other media interested tenants effectively identify themselves.

It is unlikely, however, that these moves to organise are simply a product of the changing profile of the tenant population. As the title of the Observer article suggests, there is also a strong sense of self-preservation. There is a feeling that in high pressure housing markets the balance of power lies too squarely with landlords and agents, and that routinely behaviour on the supply side is nothing other than exploitative. Indeed, recent news that some landlords are returning to the discriminatory practices of the 1950s and 1960s suggests that problems of shortage are not only acute but also breed antisocial behaviour. And not from the tenants.

Better organisation may be a means by which tenants can counter this worsening situation.

Perhaps the most intriguing snippet in the Observer article is the proposal by The Tenants’ Voice that their new website will “include a Trip Advisor-style rate and review system where tenants can provide feedback and share their experiences about both good and bad landlords and agents”. I mentioned this initiative in a post a while ago. It is a proposal that comes with some problems. But it is one that further demonstrates the potential of technology to transform the way in which the market functions. Publicly available information has the potential to substitute for more conventional, and generally ineffective, enforcement mechanisms as a disciplinary mechanism to be applied to landlords.

We currently face the need to rethink the characteristics of house purchase decisions because the web has dramatically lowered the search costs associated with the process. Perhaps in a few years’ time we will face a parallel challenge to rethinking our understanding of private rented sector decision making. If so then that would be a positive sign, because it would mean that the tenants have managed to marshal information in a way that allows at least a partial fightback.