Over at Cif today Grant Shapps makes another attempt to make the case for the policy of criminalising all squatting of residential buildings. He makes the connection to homelessness support and rightly points out that there is more money going in to homelessness services, which may compensate for some of the homelessness generated by changing the law on squatting.

But it seems that Mr Shapps is not happy. He’s not happy with the response his proposals have received in some quarters. In particular he starts his piece by arguing that: 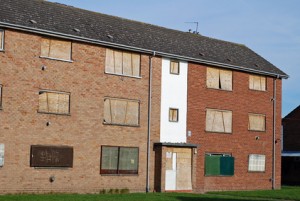 The fact some academics in their ivory towers and lawyers in their inns of court believe it’s morally wrong to stop this destructive behaviour only shows how completely disconnected from everyday life they have become.

One can never be sure – and, of course, I may flatter myself – but I suspect I am one of these “academics in their ivory towers” who Mr Shapps feels are so disconnected from reality sitting here at my dining table (not in an ivory tower I’m afraid).

I have pointed out in both Caring diddlysquat about democracy and Criminalising squatting that the Housing Minister is misrepresenting or misinterpreting the law as it currently stands. Squatting someone’s home is already a criminal offence. It is only squatting an unoccupied building that isn’t. The proposed changes to the law will primarily benefit absentee landlords, property companies and social landlords who are, for whatever reason, holding properties empty. The claim that this is about protecting the “hard working homeowner” is a smokescreen.

I have also argued that research demonstrates that in most instances squatting is a last resort when the only other alternative is rough sleeping. In addition, squatters include some of the most vulnerable people in society – there is, for example, a higher incidence of physical and mental impairment than in the general population.

None of that is to condone squatting. Nor is it to argue that squatting is a desirable solution to homelessness.

It is, however, to argue that it is a good idea to try to understand what is actually happening. We are not, pace Mr Shapps, talking about whether stopping squatting is morally right or wrong. Indeed, I’m not sure this was a debate about morality. For me it was more a debate about accuracy and evidence. Unless, of course, we are discussing whether it is morally justified to persistently misrepresent a situation in order to seek support for a policy that will damage vulnerable people. Personally I’m more interested in understanding the situation in a way that gives us a better chance of dealing effectively with the problem.

We should no doubt welcome resources being channelled into homelessness support. But these resources are going to be entirely inadequate to deal with the scale of the problem. And these moves need to be set in the context of serious cuts in Supporting People funding and restrictions in the Local Housing Allowance that are going to make it harder for poorer people and people with support needs to continue to live independently in settled accommodation.

A society in which squatting did not exist, because no one felt compelled by circumstance to squat, would no doubt be welcomed by everyone. I would certainly welcome it because it means we will have succeeded in dealing with some very difficult, if not intractable, social problems. Squatting is only a symptom.

But criminalisation isn’t the way to achieve that happy day.