A storm is heading our way. That’s the only conclusion you can sensibly draw from reading the second annual independent Homelessness Monitor, funded by Crisis and published this month.

Homelessness is a complex phenomenon, with its roots in the interaction of structural, social and individual factors. Broad economic and labour market trends can contribute to homelessness, but the housing market acts as the more direct driver. Social capital and individual resilience can reduce the risks of homelessness, while persistent structural weaknesses can slowly erode those personal protective factors and increase risks. 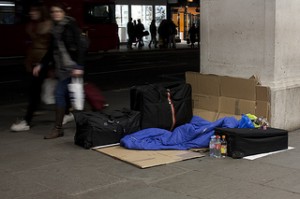 The English social safety net is conventionally seen as having a rather different structure to those of many other developed industrial countries. Our mainstream social security benefits are rather meagre by international standards, and their real value has been significantly eroded over the last couple of decades. But this is counterbalanced by a stronger housing safety net and stronger statutory homelessness provision for many types of household, although typically not for single people. It is the housing safety net, not the social security system, that breaks the link between low income and poor housing conditions. As a consequence, while the UK doesn’t do terribly well in terms of poverty rates, when looked at comparatively and cross-nationally it does rather better in terms of housing conditions.

This model is being severely challenged by the current Government’s austerity agenda.

In respect of social security we are in the midst of a debate over the Chancellor’s Autumn Statement proposal to uprate benefits by only 1%, which represents a real terms cut.

On the housing side, the Coalition has been very active. And in all cases the change has been towards weakening the protections available. More specifically, the authors of the Homelessness Monitor note that:

Three key housing policy instruments appear to contribute to these relatively good housing outcomes for low income households in the UK: Housing Benefit; a substantial social housing sector, which acts as a relatively broad, and stable, ‘safety net’ for a large proportion of low income households; and the statutory homelessness system, which protects some categories of those in the most acute need.

I have discussed most of these changes in more detail in previous posts.

The authors go on to argue that the statistical traces of a deterioration in housing circumstances for the poorest are already evident. Both visible and concealed homelessness is on the rise. Some of this rise predates the arrival of the Coalition, after a decade of deteriorating affordability and the 2007 crash, but some of the trajectories appear to be accelerating. For example:

After falling for six years, statutory homelessness numbers bottomed out in late 2009. In the following two and a half years the quarterly total has risen by 34%. This means that the number of households accepted as statutorily homeless in England rose from 40,020 in 2009/10 to 50,290 in 2011/12. This recent increase in statutory homelessness has disproportionately affected families with children. Temporary accommodation placements have also started to rise, with overall Bed and Breakfast hotel placements almost doubling in the two years to March 2012 (from a snapshot total of 2,050 at end 2010/11 to 3,960 at end 2011/12). Rising numbers of households with children in Bed and Breakfast hotels have been even more alarming, from 630 at end March 2010 to 1,660 at end March 2012. Moreover, a substantial proportion of families with children living in Bed and Breakfasts hotels now staying there for longer than the six weeks maximum prescribed by law

After a long-term decline, there was an increase in the number of sharing households in the period 2007/2010, which appears consistent with constrained access to housing in the recession following the 2007 credit crunch.

Overcrowding has increased markedly since 2003, from 2.4% to 3.0% of all households, reversing previous declining trends. On the most recent figures 670,000 households were overcrowded in England.

The authors identify the private rented sector as being key to much of the increase in homelessness. The ending of assured shorthold tenancies is a key reason for households to find themselves homeless, particularly in London and the South East.

And they point out that these increases in the indicators of house stress and homelessness have occurred before the full force of the Coalition’s welfare agenda has kicked in. Over this last year all sorts of transitional arrangements, reliefs and wheezes have been in play. These will be exhausted soon. Next year we have the bedroom tax, the cut in council tax benefit, the overall limit on benefit payments and – possibly – the arrival of Universal Credit. Each of these will increase the stresses on households trying to remain in their current accommodation and avoid arrears. Each will undoubtedly lead to some households no longer being able to afford their current accommodation and finding themselves homeless. Take all the changes together – and recognising that it will often be the same households who are affected by each of them – and the affordability pressures will inevitably become intense. More homelessness is inevitable.

Some of the displaced households may be able to find alternative accommodation locally. It may be cheaper. It may be more overcrowded or poorer quality. But it would be local.

Others will not. They are already living in the poorest quality, cheapest accommodation in the area.

We then move in to the debate over whether people have a right to carry on living in or near their current area of residence, near their family and social networks, near their current employer. Or whether they should be expected or obliged to engage in inter-regional migration in order to find suitable affordable accommodation.

That isn’t a debate for today. Even if we fervently believe it is right – or mere reluctantly accept – that forced internal migration is the best outcome, it has to be acknowledged that it is a policy response that carries significant costs both to the households concerned and to the public purse.

Who do we expect to be affected by the current policy agendas? There is some talk of middle class homelessness. Of housing stress among the squeezed middle. This may well have increased. But these are the people who have the social capital and individual resilience to cope. When we look at who is likely to find themselves at risk in the near future the authors of the Homelessness Monitor are unambiguous:

all of the indications are that the expanding risk of homelessness is heavily concentrated, as always, on the poorest and most disadvantaged sections of the community, who lack the financial and/or social ‘equity’ that enables most people to deal with work or relationship crises without becoming homeless. The sort of direct relationship between loss of income and homelessness implied … is to be found much more readily in those countries (such as the United States) and amongst those groups (such as recent migrants) where very weak welfare protection applies. Such a scenario may, however, be brought closer for the UK by the current significant cuts in welfare benefits being implemented by the Coalition Government.

It looks like 2013 is shaping up to be a pretty rough year.