It’s only going to get worse

It seems that with each passing week the news on the housing front gets gloomier. A week ago the NHF published its latest Home Truths report which extrapolated current trends and concluded that if things carry on as they are then affordability – or rather unaffordability – will pretty rapidly reach new heights of absurdity. And we are barely able to grasp the implications of the longer-term scenarios for prices and rents set out in the report.

Of course, the chances of these forecasts proving accurate are pretty low. All sorts of things could, and probably will, intervene in the meantime. For example, the probability of a Help to Buy fuelled property price implosion just in time for – or more likely just after – the 2015 General Election is non-zero. And if that happens then the direction of the whole debate will change.

But the purpose of such forecasts is not to be accurate. They are a political call to action to try to ensure the future turns out differently. Given the media profile that the report achieved I would imagine the report is seen as having met its short term objectives at least. 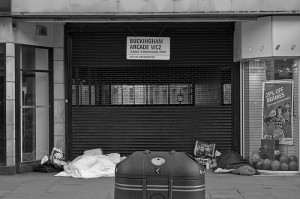 A more substantial piece of research emerged a few days later when the third instalment of the Crisis/JRF Homelessness Monitor was published. This is an invaluable long term project documenting the impact of the changing social, economic and policy context upon housing and homelessness since the arrival of the Coalition government. I blogged about the previous report in The gathering storm. This year’s report presents a similarly gloomy picture. Jules has summarized some of the key points already. The trajectory of homelessness is very different in different regions, as are the principal causes in different parts of the country. But the overall picture the report paints is one of a deteriorating situation.

The report identifies three issues, which have perhaps had less prominence in the debate so far, that I thought worth noting.

The first issue is the importance of Supporting People funding to the whole story. SP is a vital part of the patchwork of support that allows people to continue to live independently. We know this, but it tends to be a bit of a specialist interest in the housing research and policy community. Yet, as the funding for preventative action dwindles towards extinction we are in the process of (re)discovering just how important it is to keeping the most vulnerable away from the most precarious housing – or non-housing – situations. And that will have a big impact on us all.

The second issue is the way in which the changes in welfare and allocations policy are felt particularly sharply by specific groups of households. We know that many of the households affected by the so-called bedroom tax have a disabled member. This has been widely discussed. But perhaps it is less obvious how tightening up policy around local connection, for example, can make the lives of women fleeing domestic violence that much more challenging.

The third issue is identified rather less directly by the report. It is that things are set to get a whole lot worse. The negative effects of change have so far been mitigated in ways that don’t offer long term solutions.

Many have argued that the Discretionary Housing Payments the Government has made available to address inequities created by welfare reform are inadequate. They are inadequate precisely because they are discretionary, but also because they are in no way sufficient to compensate for the money lost from housing benefit. The issue now, however, is that this is transitional relief and there is going to be a time in the not too distant future when it runs out. Then a substantial additional group of households will find themselves in an unsustainable housing position.

This brings us to the related issue of arrears and evictions. Plenty of social landlords have been relatively slow, in the face of arrears resulting from welfare reform, to move to evict tenants. Plenty of resources have been redirected not only to debt recovery but also to preventative work on budgeting skills and the like. The aim is to keep as many tenants in their homes as possible.

But there has to be a big question over the sustainability of this approach, for all sorts of reasons. Putting aside the point that the increased risks associated with income streams impact upon landlords’ ability or willingness to build new properties, there will come a point at which they will be compelled to act to avoid incurring the wrath of their lenders.

How large this is looming in the thoughts of individual landlords will depend on a host of factors including tenant profile, stock profile, treasury management policies, and risk appetite during the good years. Some have a financial cushion to work with. For some I suspect the warning lights will already be flashing.

Lenders vary in their approach, of course, but quite a few are looking for any excuse to reprice their loans to increase margins. If rental income is impaired to the point where breaching a loan covenant is a serious prospect then landlords will have to take evasive action. Or the consequences for all tenants, or the financial viability of the organisation, could be dire. In the short term that evasive action may well be to induce tenant turnover in order to bring in more tenants who are able, and demonstrably willing, to pay the full rent.

So the housing circumstances of some of the poorest are likely to deteriorate discernibly over the next year. And the hold that some of the most vulnerable have on the housing market is going to get more precarious.

That is an extrapolation of a trend we can be much more confident about.

The only sensible conclusion to draw is that it’s only going to get worse.