The policy con is on: Welfare and workfare in Cameron’s Britain 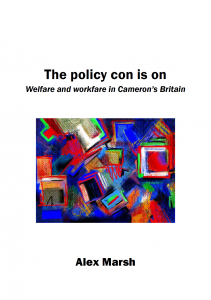 The Conservative party views welfare reform as one of the most popular policies it has pursued through the Coalition government. But welfare reform has been subject to sustained critique. Even the use of the term “welfare”, rather than more neutral descriptors such as “social assistance” or “social security”, has been subject to criticism. The change of discourse sends subtle signals about the values underpinning the system and the status of those who rely on it.

This book brings together a collection of the essays focusing on the Coalition Government’s welfare reform agenda that I have posted on this blog since July 2010. It covers social security reform, housing benefit changes, workfare, poverty, the minimum wage, and the divisiveness of the Government’s policy narratives around “welfare”. I have been particularly interested in the use and abuse of language and the disconnection between policy discourses and available evidence. The essays are arranged chronologically, tracing the agenda as it has developed.

The Policy Con Is On: Welfare and workfare in Cameron’s Britain by Alex Marsh