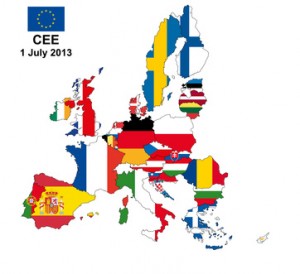 I think it’s more than 18 months since I last blogged about politics and Europe. But today I found myself almost agreeing with something Boris writes in his Daily Telegraph column on the Tories’ referendum ructions. That doesn’t happens very often. So that got me thinking.

The main point I made back in October 2011 in Finding an antidote to Europhobia was that someone other than Nick Clegg needs to be making the positive case for Europe. And doing it sooner rather than later. If pro-Europeans are coy and wait until we are in referendum season then the atmosphere will already have been so badly poisoned by the radical Right’s outbreak of irrational Europhobia that any sort balanced assessment of the case for the EU will be impossible. That seems to me to hold as true today as it did then. Indeed, it is clear that Europhobia has already spread considerably during the intervening period.

Boris’s piece today has attracted most attention because he draws an unflattering comparison between the “sloth” of the British worker and the productivity of the German worker. I’m sure the use of the word was calculated, but it was rather gratuitous and distracted entirely from the point he was seeking to make.

On the face of it Boris’s column is a call for a more balanced discussion of the pros and cons of membership of the EU. His is a self-styled cool head when all around him appear to be losing theirs. He’s behind Cameron in his bid to renegotiate the UK’s relationship with the EU down to one of “free trade and political cooperation”.  His main point is that the threat of UK exit has to be credible if the renegotiation is going to deliver change.

The piece is perhaps a bit smarter than it first appears. But then Boris is not as daft as he looks.

1. Foreign direct investment. There may be a risk (thought this is far from proven) that international companies and funds could be put off from investing in the UK by the notion that Britain has somehow cut itself off from a giant European market.

3. Global influence. The EU is arguably better placed to strike trade deals with the US, or China, than the UK on its own, though this proposing is plainly untested, …

4. Perception of the UK. It is often said that our strategic significance for the Americans or the Chinese depends on our membership of the EU; though, again, this is untested …

This all sounds like it is arguing for an evidence-based assessment of the validity of these arguments. But what sort of evidence would do the job? We heard President Obama today saying he thought the UK would be better placed sorting out its differences with the rest of Europe rather than exiting. Is that the sort of evidence Boris had in mind? Or will the Europhobes dismiss Obama’s comments as being “the sort of thing he would say wouldn’t he”? If the latter then the only evidence that is likely to be persuasive is to leave the EU and see if the country’s trading relations and economic performance collapses. So the appeal is to evidence that is unobtainable before the fact.

Boris finishes his section on the pros of EU membership with the following point:

More generally, there is a risk that leaving the EU will be globally interpreted as a narrow, xenophobic, backward-looking thing to do.

The only thing I would disagree with here is that it isn’t a risk it’s a certainty.

Boris then lays out his arguments in favour of leaving the EU. These are that the country would: save money; get back its sovereignty; make our own laws again; and could no longer blame Brussels for our problems.

The issue of sovereignty is handled in an interesting way. Boris argues, in relation to borders, that:

We would no longer be in the mad position of being forced to extend our entire welfare system to anyone from Bulgaria or Romania, while keeping out lucrative Chinese tourists to achieve immigration caps.

The obvious response to this is that this “mad position” is of the UK government’s own making. There is no one in the EU forcing them to keep out lucrative Chinese tourists. The immigration caps are a domestic concoction. And he probably means students anyway.

Boris refers to our no longer being “forced to accept the vast corpus of EU regulation and legislation”. But even here he is perhaps principled enough not to be able to regurgitate UKIP bilge without qualification:

… though we would also find ourselves being forced to comply, thanks to the sheer lunar pull of the EU market, if we want to continue to export to Europe.

For all the sound and fury over Brexit and rediscovering its destiny as an independent trading nation, if the UK left the EU but its businesses wanted to continue to export into the EU they would still be obliged to conform to most of the regulations anyway. All that leaving would achieve is removing the UK’s ability to influence the content of those regulations.

It is the last of Boris’s points – that the UK would no longer be able to blame Brussels – that is the most telling, although it is here that he rather overplays his hand.

This is perhaps the most important point of all. If we left the EU, we would end this sterile debate, and we would have to recognise that most of our problems are not causes by “Bwussels” (sic), but by chronic British short-termism, inadequate management, sloth, low skills, a culture of easy gratification and under-investment in both human and physical capital and infrastructure.

As I noted above, it is the insertion of the word “sloth” in that list that has attracted attention. Boris then goes on to compare UK workers and German workers. Len Duvall at Labour List has noted that there are two ironies here. First, few have done more than Boris to promote the sort of short-termism that drives our financialised economy, to the detriment of investment and improved productivity. Second, the comparison with Germany is a strange one for Boris to highlight because the source of Germany’s economic strength is typically seen as lying in a range of institutional characteristics that are anathema to the radical Right in Britain – not just an active state, but collective bargaining and worker representation at board level, labour market rigidities, a generous welfare state, and a variety of broader corporatist structures.

Putting that to one side, Boris’s list of problems with the UK economy includes plenty of issues that are very familiar. We don’t need to invoke sloth or a culture of easy gratification. Indeed, I’m pretty sure that those who spend their time thinking about why, despite the odd hi-tech bright spot here and there, the real economy in the UK has underachieved for many decades would find much of Boris’s list pretty conventional.

The whole debate over the country’s membership of Europe and whether there should be referendum now, later or never, is a complete red herring. But, as Boris suggests, it serves a purpose. It gives us something or someone to blame rather than face up to some deeper-rooted problems. Problems with educational achievement, the devaluing of technical education, the supply of finance to small business, the lack of support for entrepreneurship, asset-stripping rather than investment, the privileging of the quick buck over the long-term relationship. And so on and so on.

It may be odd that he’s the person making this argument but that doesn’t detract from the fact that it’s an argument that needs to be made.