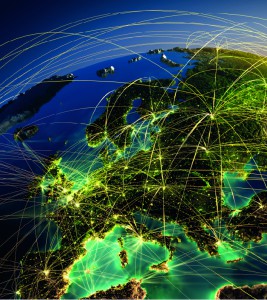 Failure to agree a way forward on the border question. It might turn out to have been nothing more than a bit of a wobble. Understandable in a high stakes negotiation. It might be an indication that the whole Brexit process is going to unravel.

We are promised a joint UK-EU announcement tomorrow morning, provided the Belfast branch of the DUP sign off on it as well. It would be fair to say that is a major proviso.

Of course, even if a revised deal is hammered out in time for next week’s EU meeting it is quite likely there will be a degree of vagueness about it. Just enough to keep the show on the road for a little longer. If so then it probably just postpones the day when the hard decisions have to be made … and one or other of the wheels fall off entirely.

If you were a cynic then you’d say that will suit the Brexit ultras nicely. Even if they work themselves up into a lather in public about promises to retain regulatory alignment and the like, those who crave hard Brexit will be celebrating in private. One more fudge keeps the clock counting down. So when the crunch comes, and one or other wheel finally falls off, there will be little time to action any sort of plan B. No Deal Brexit awaits. The ultimate prize. The pyrrhic victory.

Or perhaps Theresa May will surprise us all and lay down the law. Perhaps she’s concluded that the only way to keep the Union together and avoid a hard border on the island of Ireland is for the UK to stay in the Single Market and the Customs Union. Perhaps her resolve has been strengthened by signs that the pro-EU Tory mutineers are organising and finding a voice, at last. If so then it’s the Brexit ultras on her own side she’s going to disappoint, and will have to face down. It’s possible. And it’s certainly the least economically damaging course of action. But I’m not sure it’s plausible.

It might be that Brexit is imminently going to collapse under the weight of its own contradictions, and take the May government with it. What happens next? The Conservatives get to have another go. A Rees-Mogg Government? The current administration – shot through with indecision, ill-discipline, inconsistency and, as has now been confirmed, demonstrable dishonesty – has already done immeasurable damage to the country’s reputation and its trustworthiness as a potential trading partner. I find it hard to imagine our prospects for a thriving twenty-first century future will be significantly enhanced if the ship of state is to be captained by the right honourable member for the nineteenth century.

Or do the Labour party take their turn? If so then we are pretty much in the dark as to which stance on Brexit they will adopt. There are clearly signs they are coming around to acknowledging in public that staying in the single market and/or customs union might be a good idea. But it will depend on which faction of the leadership prevails when the time comes. It’s quite possible that Uncle Jeremy is keeping his mouth shut just now so as not to frighten away all those people beguiled by Starmer’s more emollient lawyerly positioning. When the time comes his own inclinations towards the hardest of Brexits might well carry the day. Even in spite of all the arguments demonstrating that delivering on almost all of Labour’s manifesto pledges does not require leaving the EU.

I have been thinking, once again, about what will happen if Theresa May – or anyone else for that matter – goes for the SM/CU option. Or concludes that if that’s the most workable option for Brexit then it would make more sense to remain an EU member and have a say in shaping future directions. Or if the whole thing disintegrates and someone seeks to repeal Article 50.

And that brings me to the failure of leadership among the pro-EU contingent.

The Remain response to the current farrago is largely to replay old battles. “Everything that has happened since June 2016 demonstrates that the Remain analysis was right”. “Project Fear becomes Project Fact”. “When it wasn’t based on a range of incompatible, undeliverable promises, the Leave campaign was built on lies that have since been cruelly exposed”. That type of thing.

However true those arguments might be they are backward looking. They might shift some of the waverers amongst us. But they are unlikely to result in a major change of heart on the part of staunch Leave voters. We can see it in the opinion polls. It appears we are now in the bizarre situation where a major chunk of the population thinks Brexit is going to turn out badly but that we should nonetheless do it anyway. The famous British sense of humour, as someone commented today on Twitter.

The pro-EU contingent should be thinking more about making arguments about what life would be like, and how things would be different, if it transpires that we do find ourselves continuing within the EU. It would be wise for someone to be laying the groundwork as a means of ameliorating the backlash from non-Brexit.

If the pro-EU contingent believe that the analysis driving Brexit was incorrect – that it wasn’t the EU that was to blame for many of the issues that caused people to vote for Brexit – then what’s the plan to address those issues, within the EU framework, if the opportunity arises to do so?

For example, what’s the story on immigration? We know that the UK took one of the more literal or rigorous approaches to implementing Freedom of Movement. We know that the UK never bothered to make use of a range of powers and controls that are available within the EU immigration framework, and that resulted in many of the issues causing discontent. How would it be played differently if there was another chance to do so? On that point, Jonathan Portes offered some thoughts the other day.

In a range of other areas – inequality, education, housing, environment, public services, infrastructure, poverty – inadequacies that populists might seek to pin on the EU are in policy areas that lie primarily within domestic control. So how should things be different in order to address the concerns stridently expressed by some of our fellow citizens? The EU wasn’t and isn’t stopping us doing anything about them.

Similarly, the weak trading performance of the UK economy has little to do with the EU. Manufacturing decline was a problem before we joined the EU. And other countries in the EU, operating under the same regulatory framework as the UK, manage to trade more successfully with the rest of the world. If we stop blaming the EU for it, how are we going to go about improving the situation?

Of course, many the same questions arise if we do leave the EU. When we no longer have the EU to blame for poor performance, what are we going to do about it? At the moment a large part of the answer to this would appear to be “and then the magic happens”. And if that’s the situation we find ourselves in then the magic is going to have to happen on a budget. Because the country is going to be an awful lot poorer.

We can’t go back in time. And there is little point spending too much time looking back. But if we look forward then at present the only future we face is the cliff edge. Some are looking eagerly towards it as a bracing leap into the unknown. Others look on in horror as they are unwillingly dragged over the edge. No one knows for sure the length of the descent or the sharpness of the rocks at the bottom.

What is the alternative future? A positive vision of an alternative future within the framework of the EU. Given most of the levers lie within our control – and always have done – what are we going to do differently? That is the story that needs telling.

And those who value the EU, and hope for a future where the UK continues to play a part in it, might be wise to start telling it. Just in case it ceases to be the alternative future.