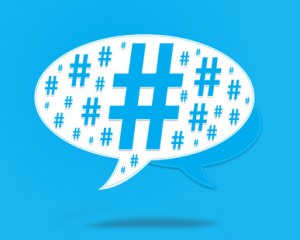 I received an email today from someone relatively new to Twitter asking me about hashtags and how they are used.

Below is an elaboration on the email I sent back. I thought there might be someone else out there who might find it useful.

Hashtags have two quite different purposes on Twitter. As far as I can tell, one of them is the intended use and the other has grown up as a convention.

The intended use: joining a conversation

Hashtags are a way of sending your tweet to a common location on Twitter which allows you and other users to search for and find tweets on a particular topic. So, if you are a political nerd, you might want to comment on a point made during Prime Minister’s Question Time at #pmqs, highlight something that has annoyed you on the Today programme at #BBCr4today or join in with the chorus of disapproval that is now an integral part of BBC Question Time at #bbcqt.

The words in the hashtag shouldn’t include apostrophes because that causes Twitter to assume you’ve moved on to the next word. So #today’swednesday would be sent to the hashtag #today. If you wanted to use the whole thing (“today’s wednesday”) as a hashtag you’d have to use #todayswednesday. It doesn’t scan as well, but people are now used to adding the apostrophes.

If the hashtag has several words in it then it can be useful to capitalise them all to help the reader #OtherwiseItGetsDifficultToRead. The advice is generally not to use more than #three #different #hashtags #in #a #single #tweet #because #it #starts #getting #messy #and #hard #to #read. I try not to use more than two.

Whether you put the hashtag at the beginning, middle or end of a tweet is a matter of taste. Often it can go anywhere with a suitably rewritten tweet:

All these tweets would be sent to the hashtag #bbcqt

Personally I try not to put the hashtag at the start, although in the example above it is the most economical way of saying the same thing.

The other issue to watch out for is minor differences in the wording of a hashtag because these will “send” the tweets to different places. #ItsAllNonsense is not the same location as #ItIsAllNonsense

One of the mysteries of Twitter is how people coordinate on to a shared hashtag. If the hashtag isn’t shared and used by everyone then the tweets get sprayed all over the place. Some hashtags are now well known. #bbcqt is a good example. But I think even there that some people tweet to #bbcquestiontime. Generally a shorter but intelligible – and ideally unambiguous – hashtag is preferred, because it leaves more characters available for other words.

Occasionally hashtags are used for more than one purpose simultaneously, which can be confusing. #PAC2014 could be the Public Administration Committee 2014 or the Penguin Admirers’ Congress 2014. So people interested in housing and housing policy in the UK tend to use the hashtag #ukhousing, because #housing is already used for US housing issues.

One of the most useful functions of a hashtag is to allow those who aren’t attending an event to follow the tweets of those who are livetweeting from the event itself. Of course, the same applies to following a television programme that you aren’t watching. In fact I find following #bbcqt is probably just as informative and certainly less painful than actually watching Question Time. You can pretty much guess what the panel are saying from the reaction.

Some events (conferences, seminars, launches) publicize a suggested hashtag in the programme or on a screen at the front of the auditorium. That is just a way of trying to short circuit the more organic process by which tweeters iterate towards a hashtag for themselves.

The possibly unintended use: the punchline or knowing aside

Some tweeters use hashtags in an entirely different way. That is as an integral part of their tweet – without the hashtag the point of the tweet is lost. The tweeter is not necessarily intending to send the tweet to be part of a broader conversation.

Here are some possibilities:

George Osborne thinks austerity has turned the UK economy round. #deluded
Just had a fun visit to the dentist. #marathonman
The boss has called us all to a meeting at 5pm on Friday #asshat
Just been for a curry with Bob. Couldn’t eat another thing. #NotEvenAWaferThinMint
Ed Miliband is using the all-purpose bankers’ bonus tax to fund more stuff? #mathsgenius

As you can no doubt tell, there is probably an infinite number of ways of doing this sort of thing.