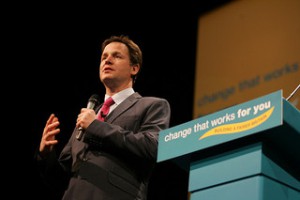 Last week I took a trip up to Sheffield for the Political Studies Association Annual Conference. I presented a paper in a panel organised by the British Liberals and Liberalism Specialist Group. The paper looks at the Liberal Democrats’ strategy in coalition government and how it interacts with the party’s unstable identity to pose challenges for the party’s future survival.

I’m not particularly planning to do anything further with the paper. So rather than leave it languishing on my hard drive, I thought I’d make a version of the paper available on Scribd in case anyone was interest. Below the fold you’ll find a revised version of the paper I presented in Sheffield.

Lib Dems in a Condem Nation

Image: via Flickr.com under Creative Commons.