Meet the new boss … the arrival of Reeves and Hunt 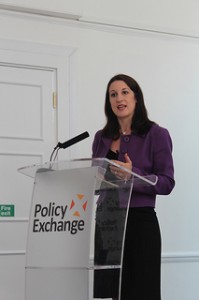 Labour seem to be getting themselves in a bit of a tangle. Again.

Ed Miliband – he of the energy price freeze and the ‘use it or lose it’ approach to development land – claims to be bringing socialism back. The removal of Stephen Twigg and Liam Byrne from the shadow cabinet and the shuffling of Jim Murphy to International Development was interpreted by some a cull of the Blairites. Some on the left hoped that this was a further indication that Labour aimed to produce a policy platform that was less Tory-lite and more identifiably social democratic. There were those who hoped control of their party may have been wrestled out of the hands of the Tory B team. But I don’t think anyone sensibly thought the party was going to travel as far as genuine socialism.

Today must therefore present a bitter prospect for those hoping for a bright new dawn.

Jim Murphy has been out and about in the media explaining that the Labour party is a centrist party. But then we might expect him to say that. I’m not sure he quite said “anchored in the centre ground of British politics” but he might as well have done.

Perhaps more importantly, Twigg and Byrne’s replacements – Tristram Hunt and Rachel Reeves – have been making their first forays into the media in their new roles. And the message they are bringing is that Labour’s not for turning. The Twigg-Byrne agenda is largely in evidence. It may very well be that Hunt and Reeves are able to do a better job of putting the message across. But the message isn’t changing. Indeed, in her piece at the Guardian Reeves suggests that Labour are going to be tougher on benefit recipients and the benefit bill than the Tories. She states that:

“Nobody should be under any illusions that they are going to be able to live a life on benefits under a Labour government,” she said. “If you can work you should be working, and under our compulsory jobs guarantee if you refuse that job you forgo your benefits, and that is really important.”

She added: “It is not an either/or question. We would be tougher [than the Conservatives]. If they don’t take it [the offer of a job] they will forfeit their benefit. But there will also be the opportunities there under a Labour government … We … will not allow people to linger on benefits …”

So the focus upon the mythical army of scroungers will continue.

Labour might respond by saying that they are not claiming there are a lot of people in this category, just that those that are will be treated punitively.

But if there aren’t a lot of them why is the focus on them? It is no better than Theresa May focusing on health tourism, which is a miniscule problem in practice, as a pretext for sustaining a discourse that vilifies foreigners in general.

As George Eaton points out at the Staggers, this presents us with the dawning realisation that Labour’s anti-social security rhetoric was not evidence that Ed Miliband was being held hostage by evil and uncaring centre-right Blairites. It is indicative of an agenda that he is fully signed up to. But the reshuffle removes the Blairite shield. He is going to have to defend the position for himself.

For those who were hoping for a more humane and enlightened approach this is going to come as a crushing disappointment. Those who were looking for Labour to combat the Tories’ stigmatisation of the disadvantaged and disabled with an inclusive narrative of rights, dignity, and compassion are going to have to face the fact that it isn’t what is on offer.

The Labour platform represents largely the same agenda as that pursued by the Conservatives in the Coalition. It may, though, be accompanied by a look of faux compassion, rather than a look of sadistic glee. A differentiator might be Labour’s jobs guarantee, but we are yet to see what that looks like and how different it looks in practice from mandatory workfare.

Labour are no doubt continuing in their attempt to capture the mythical centre and the fickle swing voter. This inevitably leads to the politics of mimicry and minimal differentiation. The important question is at what cost in terms of the disillusionment and disengagement of those who seek a genuine alternative to the ugly politics of division offered by the Tories. For some this reassertion of existing policy directions will no doubt seem like the last straw. From my Twitter feed this morning there would appear to be plenty of people in this latter camp. So this tactic may turn out to misfire badly.

I was struck by a couple of tweets by @kerihw

The Tories and Labour can save loads on manifesto printing costs by having the same one done in different colours. Prontaprint can do this.

Finding all the political parties in your democracy unmanageable? Hard to keep track of? Why not combine them into one easy monthly party.

The tweets are humorous, of course. (And if you don’t follow @kerihw then you really should.) But they encapsulate very well the bland uniformity of our current political landscape. No wonder UKIP are doing well. Almost no one has any idea what they actually stand for apart from a pathological hatred of Europe, but they aren’t like the other parties full of identikit professional politicians.