Making the case for the right to housing

There’s plenty happening in the housing world at the moment, and I’m not just

We’ve seen IPPR launch a fuller version of its proposals for shifting housing subsidy away from housing benefit and back towards bricks and mortar. It attempts to tackle the thorny issue of how to find the money to subsidize new building while still paying housing benefit to those who need it, given that a future government isn’t likely to put a lot more money into housing.

We’ve also seen some high profile housing-related programmes on the television, particular in relation to the less wholesome aspects of private landlordism.

And, perhaps more significant in the short term, Mark Carney has turned talk of macroprudential regulation into some concrete proposals for capping loan-to-value ratios. Quite how that will affect the way the market evolves over the coming months is a tricky question to answer. The industry view would appear to be “not much“. Answering the question is made trickier by the emergence from the red corner of a much stronger set of proposals for a mansion tax. It has been argued that these proposals, coming on top of the well-established support for a mansion tax from the Liberal Democrats, bring such a tax a step nearer and, consequently, are having a chilling effect on the top end of the market in London.

Although the picture is murky, there is a quite a bit of talk at the moment about the market starting to soften. And that is even before interest rates rise. So we could be entering a new phase in the evolution of the market.

For me one of the most interesting developments over the last week or so is the appearance online of a paper by Suzanne Fitzpatrick, Bo Bengtsson and Beth Watts entitled Rights to housing: Reviewing the terrain and exploring the way forward (paywalled, unfortunately).

The paper addresses a rather abstract set of debates but then seeks to connect them to issues of more practical policy relevance.

We are passing through a period in which the housing circumstances of many poor, and not so poor, households are deteriorating. That is partly about deteriorating affordability in the private sector. It is partly about decreasing assistance from the state to meet housing costs. There is a prevailing policy narrative that focuses on fairness and what can be afforded. If people end up living in inadequate housing then that may be regrettable, but – by implication – it is acceptable in the circumstances.

There is, of course, a substantial coalition of interests and organisations seeking to make the case for housing against this policy direction.

To achieve the goal of a more enlightened approach to housing, the case can – and should – be made a several levels.

Most lobbying effort focuses on the more practical level – the difference good quality housing makes directly and, if policy makers don’t find that sufficiently important in itself, then the focus switches to positive spillovers in terms of savings on healthcare, improvements in education, and gains in economic growth and productivity.

But to some extent these are all instrumental justifications for the government pursuing a more active housing policy. The debate takes on a very different tone when framed in terms of a right to housing. If it is accepted that something is a right then failure on the part of policy makers to act is not merely an unfortunate omission, but potentially the denial of an entitlement.

So there is work to be done by taking a step back from the instrumental case for housing and looking at some foundational principles. It’s a point I’ve made on this blog before, although it isn’t an activity that, if I’m honest, I’ve made much of a contribution to myself. 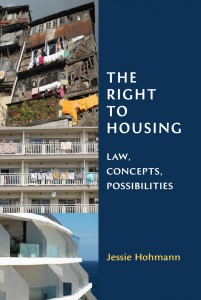 The aim is to root the case for the right to housing in a robust philosophical account of how housing can contribute to everyone being able to achieve a life lived well. This is the project to which Fitzpatrick and colleagues seek to contribute by connecting housing to Nussbaum’s version of the capabilities approach. They then develop the further connection between housing, citizenship rights and provisions embodied in the various international treaties to which national law and policy is obliged to have regard. This is terrain that has recently also been reviewed at greater length by Jessie Hohmann.

The role of housing in allowing people to achieve a good life lived well is by no means straightforward. That point is well illustrated in an earlier paper by Nicholls which used the capabilities approach to highlight the trade offs that some homeless households can face between settled accommodation and sociability and community. The point here is that stable and secure housing is important, but on its own it may well not be enough to allow people to live well.

There is also continuing debate over some of the more foundational concepts – be it the coherence of approaches to understanding human flourishing or the status of discourses of human rights. The project of making the case for a right to housing is by no means complete.

But it is welcome to see that it is a task that continues to be tackled. Hopefully other members of the academic community will lend a hand. Because this is the sort of area in which academics have not only the inclination but also the comparative advantage. It is one of the areas in which academics have an opportunity to make a distinctive, highly policy-relevant but not party political contribution to the housing debate.