An Elected Mayor for Bristol?

Yesterday evening the first public debate in the run up to May’s Mayoral Referendum was held at the Council House. Several hundred people braved some pretty foul weather to hear George Ferguson and Mark Weston argue for an Elected Mayor and Barbara Janke and Deborah Hallett argue against.  I did an opening talk to set the scene. The text of that talk is below, if you’re interested.

Much of the event was taken up with responding to questions from the floor. These questions mixed the insightful and important with the slightly beside the point and the political point-scoring.

The first of these issues is absolutely spot on. A vote yes campaign already exists. A vote no campaign is just launching. But there is no readily available source of accessible and disinterested information on what will happen in the run up to the referendum, or how a system of governance based upon an Elected Mayor could work. Barbara Janke stated that the City Council will make information available on its website. But there is a need for other sources as well.

In relation to the other points noted here, some of them are well-made. For example, the powers of existing elected Mayors are not much greater than the powers of the current Council leader. They do not compare with the powers associated with strong executive mayors that are well-established in many European countries. The Government has indicated that there is a willingness to devolve more power to cities, but this doesn’t require adopting the Elected Mayor model.

Some of the other issues represent fears that can potentially be allayed. The corruption issue, for example, is important. But it isn’t clear that it is worse in Mayoral systems than under conventional governance arrangements. The key is whether there are appropriate checks and balances – rigorous scrutiny arrangements – in place. But that takes us back to the first issue.

There was also a robust contribution from the floor to the effect that many of the questions seemed driven by fear. Fear of change and fear of the unknown. People seemed to want to stay with the current system even though it is not working well. This was felt to show a lack of ambition.

The text accompanying my presentation follows:

Should Bristol have an Elected Mayor? 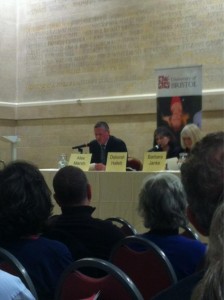 We will shortly face a significant political decision. A decision which could prove, in time, to be of profound importance for the future trajectory and future success of our city.

On 3rd May we are going to be asked to vote on whether or not we would like to be governed by a directly elected mayor.

More specifically, we are going to be asked:

If we say yes to a Mayor then it could represent the biggest upheaval to local democracy since the dissolution of Avon County Council in 1996.

If we say no … then the issue won’t be revisited for many years.

I just want to make a few opening remarks to set the scene; before handing over to my distinguished colleagues on the panel to present you with the different sides of the debate and to give you an idea of what is at stake.

Bristol has had a mayor since the year 1216. The role became the Lord Mayor at the very end of the nineteenth century. The Lord Mayor is elected each year by the council and is the charged with representing the City in a wide variety of contexts, and has an intensive programme of activities and events.

But the Lord Mayor’s role is primarily ceremonial. There is little power attached to it.

We are being asked to decide whether we are instead to have an Elected Mayor – elected directly by the people of Bristol – who would have genuine decision making power.

The model currently operated by the city council – a Leader of the Council, elected by councillors, working with a Cabinet – would be replaced by a Mayor directly elected by the people. A Mayor who has the power to set an agenda and shape his or her own Cabinet.

This is not a new issue

Debates in England about the benefits of Directly Elected Mayors started in the early 1990s. Instigated by Michael Heseltine.

But things did not get very far, largely in the face of concerns from Conservative backbench MPs.

Under Tony Blair the debate was revived.

The Local Government Act 2000 required local authorities to put in place new governance arrangements. One possibility was an Elected Mayor and cabinet.

The Act also allowed citizens to petition the local authority to hold a referendum on the move to an Elected Mayor.

In 2001 Bristol City Council set up the Bristol Democracy Commission to consider the issue, chaired by my predecessor Dr Paul Burton.

The Commission recommended a Mayor as the way forward. But this recommendation wasn’t pursued.

In fact, Bristol was not alone in this.

The majority of local authority councillors across the country proved resistant to moving away from a model of local government built upon local party groupings.

And in even fewer areas was the outcome of the referendum a vote in favour of an Elected Mayor.

Outside London, only 13 out of over 400 local authorities currently operate with an Elected Mayor. The most recent being Leicester City Council, which elected its first mayor in May 2011. Salford City Council will join them when it holds its first Mayoral election in May 2012.

One issue at stake in the discussion of an Elected Mayor is whether local politics must be synonymous with party politics. Of the 13 mayors currently in post, five are not aligned to one of the three main national political parties. [One of the five is an English Democrat. Four are independent.]

The Coalition Government has put the issue of Mayors squarely back on the agenda. There is a belief, particular on the Conservative side of the Coalition, that Elected Mayors are the way forward for city government.

England’s large cities are the powerhouse of the economy. There is a belief that they need strong city leadership in order to thrive.

And that an Elected Mayor can deliver it.

Some of the strongest advocates of Elected Mayors nationally are calling for Mayors for city-regions. So-called “metro mayors”. That is not what is on offer. At least not yet.

We are being offered the chance of a Mayor for the City of Bristol.

So in our deliberations we are not alone

The Government has brought this issue into focus in our great cities by inserting into the Localism Act the requirement that they hold a referendum in May.

The citizens of Birmingham, Leeds, Sheffield, Bradford, Manchester, Wakefield, Coventry, Nottingham and Newcastle-upon-Tyne are having similar conversations and debates.

The citizens of Liverpool are in a different position. On 8th February the council took the decision to move to an Elected Mayor, without a referendum. This is possible as long as a sufficiently large majority of councillors support the move.

Under its Localism Agenda this Government is pursuing a strategy with several strands. Elected mayors are only a part of it.

A key change of emphasis is found in the idea of a general power of competence for local authorities. There are also new powers of neighbourhood planning and new rights for communities.

Under the heading “Unlocking growth in cities” the Government is negotiating with the core cities, including Bristol, over how to stimulate economic growth. These discussions include the possibility of so-called “bespoke decentralisation” – the Government striking deals with individual cities over which powers to devolve.

However, critics argue that local authorities are being steered in the direction of an Elected Mayor by Government.

In the academic literature the distinction is drawn between strong mayors, with wide ranging powers and discretion, and weak mayors, hemmed in by rules and political constraints.

Elected Mayors in England are not much stronger than a conventional Council Leader. In practice most of them have had to be very good networkers to get things done.

That leads to an interest in hard and soft power. Mayors may not have greatly more extensive hard powers – conveyed by legislation – than council leaders, at present. But advocates believe that the office of the mayor opens up greater opportunities to use soft power. The power of influence.

There is also a sense in which powers can evolve and strengthen as practice develops over time … as has happened with the Welsh Assembly Government.

A key message from the experience of English mayors so far is that there is no straightforward message. The move to an Elected Mayor can be successful and transform a local authority or the move can be a disaster, as it has been in a couple of high profile cases. In 2009 Stoke-on-Trent, for example, voted to get rid of its Elected Mayor and go back to a more conventional Leader and Cabinet structure. I am sure there is a possibility that you will hear more about those cases very soon.

It is equally true that local authority performance and local political cultures can be transformed or revived without moving to an Elected Mayor.

But does that require a Mayor?

That is the issue that we’re here to explore.