A wake up call from Bradford West 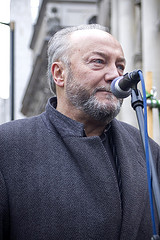 George Galloway’s historic victory in Bradford West apparently snuck up on everyone while the inhabitants of the Westminster village were squabbling over their pasty consumption or creating mayhem over the supply of petrol. But for more acute observers – who’d actually been paying attention to the way the campaign in Bradford was evolving – it was less of a surprise. Galloway is in many ways an objectionable character, but he is the consummate politician, an outstanding orator, and can clearly mount an effective local political campaign.

There has already been plenty of comment on what this result means. No doubt that will continue across the weekend papers. The result could be profoundly significant in the long run.

It is clearly disastrous for Labour. The Government has had an appalling couple of weeks and yet Labour still could not turn it to their advantage.

Earlier this week I blogged about the Car Crash Coalition – I used the motoring metaphor before the latest episode relating to petrol. The handling of the petrol strike threat demonstrates incompetence whichever way you look at it. To stoke unnecessary panic in the face of strike that was not even confirmed was irresponsible. To do so as part of a “strategy” to challenge the unions, a la Thatcher’s challenge to the mineworkers, as highlighted by Charles Moore in the Telegraph, is politically incompetent. A moment’s thought would demonstrate that the analogy between the two situations clearly doesn’t hold.

Online conspiracy theorists were suggesting a different interpretation. The panic was engineered by the Government in order to stave off a technical recession – panic buying in the last few days of the quarter would boost GDP (and tax revenues). The fact that it is hard to dismiss this argument out of hand as utterly implausible says something about popular perceptions of the depths to which the Government is willing to sink.

The Conservative vote in Bradford West evaporated, dropping by more than 20 percentage points.  Many must have voted for Galloway in order to defeat Labour. That’s a heck of a tactical vote. The Lib Dems lost their deposit for the third time out of the six by-elections since the General Election. They weren’t anticipating doing well. And so it came to pass.

Overall the Coalition accounted for only 13% of the vote. That ought to set plenty of alarm bells ringing.

Yet in the face of all this unpopularity and incompetence Labour didn’t manage to make much headway. It is clear that there are local factors at work in Bradford West. It has a very particular demographic profile which means it is susceptible to Galloway’s shtick. Yet to write off the result as a freak would be wrong. The Labour approach to the election would appear to have been rather complacent and lacking in any great sensitivity to local concerns.

Rather than focus on the implications for the parties, the more important issue is the implications for mainstream politics as a whole. The three main Westminster parties combined only accounted for 38% of the vote in Bradford West. In any sane world that ought to be a grave cause for concern. On Twitter yesterday several people were asking whether the result was an indication that party politics was in terminal decline. The parties’ identikit policy platforms, the way they draw their frontbenches from a narrow and privileged social classes, the absence of much in the way of real world experience among professional politicians, their constant triangulation which means no one seems to stand for anything, their apparent willingness to pander to powerful corporate interests and not take a stand for the little guy, their consequent failure to adequately address the big issues. For all these reasons and more many people feel politicians are out of touch. They have no idea what economic stagnation and fiscal austerity actually mean for the quality of many people’s lives. There is no empathy. No sympathy. No true understanding. The members are not honourable. There is no trust. So there is disillusionment and disengagement.

I have to say that I’ve spent enough time mixing with political types to have some sympathy with this view. I don’t find spending too much time with career-minded political advisors or SPADs to be good for the soul. It’s all a great big game of political snakes and ladders, with the goal of getting on to the frontbench and doing the other guy down. It’s less often about the people that politics is supposed to be serving.

Then again, I’ve met plenty of thoughtful, committed and connected people in politics as well. But many of them are not sufficiently careerist, willing to schmooze or toe the party line to get close to the top of the ladder.

So we are locked in an unhealthy cycle.

Lewis Baston over at the LSE British politics and policy blog notes:

Galloway’s victory confirms that there is a big political space for populists and celebrities, despite the failure of such candidates in the 2010 general election. To his enemies Galloway is an unscrupulous demagogue, but to many others he is a charismatic orator who is demonised mostly because he ‘tells the truth’ (as they see it) … His particular pitch concentrating on the Arab world would have little traction in a seat that was not heavily Muslim, but there was a sense that he was talking about big issues in a way that connected with people … The fact that most politicians and commentators regard Galloway with hatred, ridicule and contempt simply did not bother the electorate of Bradford West, and may indeed have been part of his appeal.

This is a problem for the political classes. But it is further exposed and reinforced by the media engagement with politics. The build up to Bradford West hardly featured on the news. While the Bradford West count was proceeding Question Time was on the BBC. Much of the discussion was taken up with issues of – at best – modest importance. The biggest round of applause of the evening came in relation to the discussion of the tax on pasties, whether it mattered if Cameron had or had not eaten a pasty recently and whether it happened in Leeds and Liverpool. Alexei Sayle stating wearily “I don’t care about this at all”. The room erupted. Apart, possibly, from providing another example of Cameron being willing to say any old nonsense to try to demonstrate that he isn’t an out of touch toff, the issue hardly ranks among the most pressing of the day.

The rest of QT was most notable for Anna Soubry repeatedly telling us that she went to a comprehensive school – and therefore, despite appearances to the contrary, isn’t an out of touch toff – and Sarah Teather displaying what seemed to be deep insecurity by prefacing every restatement of the Coalition line with “As a Government Minister …”. Oh, and Alexei Sayle getting worked up enough to drop the f-bomb.

But much of the discussion comprised facile opinions on relatively trivial issues. It was noticeable that the non-politicians on the panel  – through their more powerful rhetoric and the more forceful content of their views – were more frequently able to carry the audience with them than the politicians. There is a timidity about many mainstream politicians – an unwillingness to say anything that might constitute a concrete commitment, or to say anything that might seriously upset anyone powerful – that leaves people wondering whether they stand for, or will stand up for, anything very specific. That leaves the stage free for ideologues like Osborne, Lansley or Gove to wreak havoc. And it opens a space for demagogues like Galloway to garner support from those seeking to support someone who is willing to take a stand on things they care about.

Democracy is not well.

But perhaps Galloway’s triumph will shock the system out of its complacency.

Image: by Lewishamdreamer via flickr.com