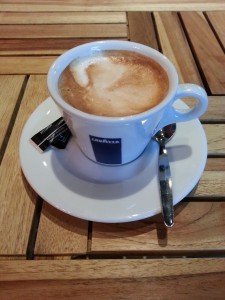 Thursday’s G2 magazine featured an article about the imminent arrival of Costa coffee in Totnes in Devon. John Harris recounts the opposition to the move among local independent coffee retailers and local residents. Totnes has a distinctive culture: people fear that Costa will undermine it. This act of resistance to the aggressive expansion strategy of this particular corporation is being replicated across the country. Communities are fighting invasion by Costa and its ilk. But they are usually losing. Will Totnes be any different?

The article clearly hit a nerve. At the moment it has been shared 1,554 times on Facebook, tweeted 371 times, and received well over 700 comments. It seems there is a desire to resist the homogenisation of the High Street. But that isn’t necessarily sufficient to stop it happening.

Near to my place in Bristol we’ve had similar experiences.

We have two excellent (and one decent) independent coffee places, all within a 100m of each other. A while ago Starbucks opened up right next to one of them. There seems to be enough trade to keep them all going. Then last year a newsagent shop shut down and within a couple of months it opened up as a branch of Costa coffee. It transpires that it had not at the time secured planning permission for this change of use. Permission was applied for retrospectively and refused. The same thing happened about a mile away on the Gloucester Road, where a Costa opened in an area with a strong established culture of independent shops and suppliers. It’s not a million miles from where a Tesco Express was trashed on its arrival last year. Here again Costa needed permission for a change of use and this was refused.

Planning authorities are not bound to accept the recommendations of their officers, but in this case the report by officers in front of councillors was well written. It soundly demonstrated why in planning terms the application should have been approved. It is hard to tell whether members of the Development Control (North) Committee were being warned about costs, or were influenced by the opposition to the scheme. It is acknowledged that the level of objection was not referred to in the reason for refusal and it was not part of the Council’s case at appeal. Nevertheless, the Council’s evidence did not show clearly why the development could not be permitted. It should not have been necessary for the planning application, and the subsequent EN [Enforcement notice], to come to appeal. The appellant incurred unnecessary expense as a result. Therefore, having regard to all other matters raised, a full award of costs in relation to these two appeals is justified.

The opposition referred to here was focused around a petition entitled Let’s not be bound by chains. The suggestion is that the planning committee could have been unduly influenced by the fact that a (vocal minority) of local residents did not want Costa in the area because they feared it threatened the economy of local independent shops.

However, while this protest may well have had considerable political salience it should have been dismissed because it was not a material consideration in a planning decision.

The Inspector made the point that the planning system is effectively neutral as to whether a particular business is run by an independent or a multinational. Planning decisions should be made in line with existing planning policy and local policy was focused on the sustainability and vitality of the areas and sustaining the broad retail focus. Bristol City Council could offer no strong evidence that the two new Costa coffee outlets threatened the sustainability or vitality of these retail areas. So effectively, as originally advised, there was no reason not to grant planning permission. The possibility that the arrival of Costa coffee might put existing independents out of business was not a consideration. It couldn’t be evidenced anyway. Even if it could be evidenced, the loss of an independent would not in itself be evidence of undermining the overall viability of the area. The planning system is not an instrument of protectionism.

Basically, if people don’t like Costa – or any other corporate – coming to an area then the only way to undo it is not to stop it opening for business but to exercise their choice not to use it, thereby putting it out of business. In fact the Planning Inspector noted that the traffic to the Gloucester Road branch, about which the protests had been stronger, better organised and more high profile, was very modest. There was a sense that people were taking their custom elsewhere.

These same arguments are being made in relation to the arrival of Costa in Totnes, although in the Totnes case the argument is that Costa will be sustained by tourists playing safe by going for the familiarity of corporate blandness and diverting trade from independent providers.

It seems to me that this hints at one of the issues underpinning this whole debate. That is, most of the coffee purchased from chain outlets in the High Street is – in my humble opinion – overpriced bilge water. Most people drinking a cappafrappacaramelskinnyflatacchino or whatever wouldn’t know coffee if it came and bit them on the bum. This was a point made with some vigour by Julie Bindel a while ago. But, on the other hand, if they stick with a chain then they know it’s a low risk option that’ll deliver a pretty standard product.

If more people were better placed to appreciate good coffee then the chains probably wouldn’t have such a hold over the sector. We still await the arrival of an effective Campaign for Real Coffee.

But can consumers voting with their feet do (for) the business? No one can say for sure. As is always the case, it may be that the protesters are a vociferous minority and everyone one else is perfectly happy to see a familiar logo.

However, there is some precedent. Just down the street from the Costa near me used to be a KFC. It didn’t last more than a year because it got hardly any trade. And before that a branch of McDonalds opened up and quickly closed: it never got too much trade, but it also had problems with planning permission. These may be cases of company scouts misreading of the market, but there was definitely an element of consumers voting with feet and spending their money in other independent outlets nearby.