Peace and trust can win the day 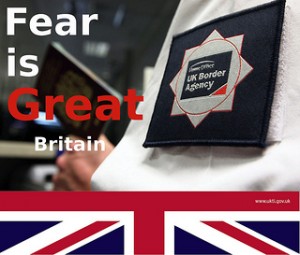 How do you feel about the immigration debate?

There seems to be a lot of anger out there.

The right wing press/UKIP axis has brought its perma-rage about all things European Union into sharper focus around the lifting of the transitional controls on Bulgarian and Romanian migrants. We’ve had weeks of build up in which an incoherent nightmare scenario has been lashed together. Hoards will arrive to take all the jobs away from British workers, while simultaneously either instigating a crime wave or living a life of pampered benefit-funded luxury for which the hard-working taxpayer will pick up the tab.

Some seem almost equally annoyed by the failure of the forecast deluge to arrive on 1st January. Highlighting that the more lurid predictions have been falsified – and hence the poverty of the alarmist rhetoric – brought forth the rapid rewriting of history. We never said they’d all arrive as soon as the controls were lifted. Give it time. They’ll be coming by coach not plane. They’ll be here soon enough.

The liberal-left are, of course, angry in a general sense about the activities of the phalanx of right-wing opiners. But it seems that at the moment there is just as much anger at the BBC for reporting on alarmism over migration almost entirely uncritically – if not actively conspiring to propagate scare stories. The space given to the anti-migration lobby, including the egregious Migration Watch, to peddle their agenda largely unchallenged has been remarkable.

It was only after the failure of the deluge to materialise that the BBC started to explore why the fears that we faced Immigeddon were likely to have been misplaced. For example, the analogy with the situation a decade ago when Polish immigration started in earnest doesn’t really hold.

The Romanian Ambassador, Ion Jinga, felt moved to respond to those expecting our airports to be deluged. He is reported as referring to “the insulting media campaign against Romanians” and as stating that “[i]t comes as a great surprise to see how attitudes towards Romania have become so easily formed by misguided and biased opinions.”

So there is anger all round. But alongside that, for me, there is a feeling of sadness.

I was very struck by a post by Stephen Baxter earlier this week. In This isn’t my Britain he considers what the anti-immigration rhetoric says about Britain and how small-minded it has become. He points out that “immigrants” are an increasingly convenient scapegoat to blame for all sorts of problems afflicting British society. Problems that – if we were honest – we should recognise we have brought on ourselves. Baxter reflects on whether there is more that he could and should have done to try to prevent this pernicious rhetoric becoming so firmly embedded.

This is an important question. But equally important is to think about what might effect change, now that the rhetoric has become embedded. One of the challenges here is that anti-immigration sentiment would appear to be almost impervious to reason.

Simon Wren-Lewis is one of several economists who have noted that the economic arguments lie very much in favour of migration, given that migrants tend to be a self-selecting group of enterprising younger people. If we pull up the drawbridge then we can expect it to have a negative impacts upon the economy and the government’s fiscal position. But these arguments seemingly cut no ice.

It will be interesting to see whether the twitter account that appeared today – @migrationwatchwatch – with the aim of challenging the misinformation spread by one particular organisation builds any profile and has any effect.

Bobby Duffy of IPSOS-Mori provided an interesting perspective on this issue at The Conversation back in October. Drawing on social psychological research, he notes that for issues like immigration standard presumptions that education can lead to enlightenment don’t necessarily hold. While, as Philip Collins points out in today’s Times, “[f]ear of immigrants is always, at root, fear of the unknown”, Duffy’s argument is that in this case reducing the dimensions of ignorance may not change the situation. Pointing out that the number of immigrants is being hugely overestimated or that the positive impact migrants have on the economy is being underestimated won’t necessarily get people who are against “rampant” immigration to change their minds.

Challenging reactionary rhetoric via satire – as in this post on Why I’m against immigration from a couple of months ago – is an alternative. Whether poking fun at the illogical or incoherent is any more effective in leading to change than evidence-based argument is an open question.

Kofi Annan has made a plea for a need to recognise the plight of the most disadvantaged – for a response rooted in empathy and common humanity. Lord Roger Roberts has today made a similar case for a compassionate response to the Syrian refugee crisis. That’s a response to the most desperate need. But seemingly the prevailing stance among the political elite is that it would be unacceptably soft-hearted to match the response by Germany, let alone the response of some Middle Eastern countries. We might just manage to squeeze in 500 refugees but not 5,000.  And certainly not the 10,000 requested by UNHCR. Our compassion does not stretch that far.

So that is our Britain?

Refugees represent one very specific component of immigration. What we don’t really have at the moment is a bold voice within the political process willing to make the case for free movement of people alongside the unquestioned positives of free trade and free capital movement.

The Liberal Democrats have decided that they have nothing to lose by making an unashamed case for membership of the European Union in the run-up to the 2014 European Elections. That should very clearly include the benefits of migration – both in to and out of Britain. Raising the drawbridge is a sign of weakness and fearfulness, not strength and confidence.

If the anti-immigration lobby want to challenge and ridicule these views then that’s up to them. But at least they’d have to make a case rather than, as at present, pronounce unopposed.  And in doing so they would expose the nature and implications of their isolationist vision to greater scrutiny.