Parliament and the fight for change 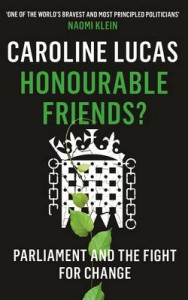 Earlier this week Caroline Lucas visited Bristol to speak at the Festival of Ideas on the key themes of her recent book Honourable Friends? Parliament and the fight for change. As well as being a hugely impressive Parliamentarian, Lucas is an extremely engaging speaker. The response from the audience of around four hundred was very positive. It was patently clear – from the spontaneous round of applause during the introductory comments onwards – that Lucas was among friends.

It was also evident that the audience largely shared the frustrations and anger at the failings of the Westminster political process that are at the core of Lucas’ book.

The book itself is an engaging account of the last half a decade – running from Lucas’ decision to run as the Green Party candidate for Brighton Pavillion in the 2010 General Election through to a look ahead to the potential difference that the 2015 General Election could make.

During the course of a reflection on the last five years in Westminster Lucas identifies a broad range of inefficiencies, inequities and absurdities in the way the so-called Mother of Parliaments operates.

Lucas has much to say about the Parliamentary voting system. Having spent ten years in the European Parliament she is ideally placed to highlight the inefficiencies of continuing to use voting lobbies rather than electronic voting. While six votes in the European Parliament would take a minute and a half, in the Westminster Parliament they would take an hour and a half. This is not just inefficient, it has democratic consequences. It means fewer amendments can be discussed in the allocated time. And because the Speaker can select amendments to put to a vote, without needing to give an account for that selection, it means some important and problematic issues never get challenged effectively. The fact that Westminster votes can occur almost at random times and MPs often have no idea what they are voting for, places a lot of power in the hands of the party whips. Lucas recounts how her attempt to require short intelligible explanations to be produced alongside each amendment – as is done in the European Parliament – was ultimately frustrated by the system. It would appear that altering the situation so that MPs actually knew what they were voting for represents a dangerous redistribution of power away from party managers.

You can imagine that the very presence of a single independently-minded Green Party MP doing whatever possible to curb the excesses of the Executive will, in itself, demonstrate to party managers why they need to hold on to power as tenaciously as possible. Otherwise this whole democracy lark might get out of hand.

Lucas highlights a range of other dysfunctions and consequences of the realities of parliamentary process and party management. Many of the concerns are familiar. But assembling them in one place reinforces the message that Westminster democratic practice is not in robust, pluralistic good health. These concerns include a voting system that delivers many safe seats and a political focus on a small number of swing voters – which means for practical purposes many voters can be ignored – and the way in which party managers seek to manage Select Committee appointments to try to keep MPs away from topics upon which they have expertise, in order to ensure they are more likely simply to follow the party line.

Honourable friends? succeeds in communicating genuine anger at the sickness that ails our system – the dominance of the Executive; the insidious effect of corporate lobbying working to put sectional interests ahead of the public good; the lack of diversity among our political representatives; the absence of evidence-based policy making, and in particular the extraordinarily high incidence of climate change scepticism among Conservative MPs; the ongoing erosion of civil liberties, the suppression of alternative critical voices, and limitations on the right to protest. It also notes that local democracy is also ill-served where the voting system delivers local authorities dominated by single parties. Plural politics is healthiest where there is genuine competition between parties, where the party in power can genuinely be held to account and its actions and proposals scrutinised. Too often under our current system this is not the case.

While Lucas is concerned that the rarefied atmosphere of the Westminster bubble means that many MPs lose sight of the fact that they are, or should be, servants of the people and lack empathy with the lives and concerns of much of the population, she has not given up hope that if people make strong enough representations through petition and protest their voices are eventually heard. That is one reason why curtailing the right to make such representations is all the more dangerous.

The question of cross-party collaboration among progressive parties is given an airing in the book. This is something that Lucas has re-emphasized in the light of the General Election result. The outcome of the General Election has made this issue – the need for a “progressive alliance” – all the more urgent. If the Conservatives proceed with their plans for boundary changes and votes for ex-pats then this will further entrench a Conservative majority, as it is intended to do.

Lucas identifies the Labour party, and its assumption that it has exclusive claim to speak for progressives, as the major barrier to collaboration. The Labour strategy at the General Election – which focused on trashing the Liberal Democrats rather than attacking the Tories – would support this analysis. And yet the Labour party is now enfeebled. There is considerable uncertainty as to whether it will find its way back as a truly national party or whether the political platform it is offering has much appeal beyond it urban heartlands in the England. In this situation a Labour party that does not at least consider seriously the scope for cross-party collaboration against the Tories would seem to be criminally stupid, if it is serious about acting on behalf of the disadvantaged. However, the sorts of pronouncements emanating from the current crop of Labour leadership candidates would seem to indicate that they see the future in different terms – it seems to involve embracing the Conservatives poisonous rhetoric and aping their political positions as closely as possible.

We could conclude that this gives us our answer – criminal stupidity it is. And yet I don’t think that is entirely correct. What the Labour leadership is doing sort of makes sense if you think your key task is to appeal to a couple of hundred thousand Labour/Tory swing voters in the south of England. But that brings us right back to the problem of our lack of a fair voting system – which means that politicians can conclude that this small group of swing voters is all that matters.

Honourable friends? ends by looking forward to the 2015 General Election. Lucas sees this as an opportunity for a change of political direction: away from unthinking austerity, unsustainable notions of economic growth, an increasingly unequal society, and an ever more insulated political class.

Of course, it didn’t quite work out like that. Rather the opposite. It would be interesting to see how Lucas would conclude the book now. I suspect the answer would entail a redoubling of effort – alongside the anger you get a sense of optimism in the face of adversity and seemingly overwhelming opposition. The book is, implicitly, an invitation to join the fight. My sense, from the event I attended on Wednesday night, is that there are plenty of people who would be willing fellow travellers. The question is how to harness that anger and energy productively, so that it can bring about genuine and lasting reform. Because it is only through changing the structures of our system that a more healthy political culture is going to emerge.