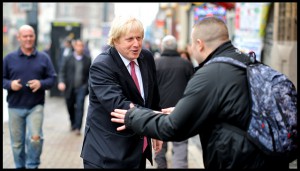 In today’s Times Matthew Parris launched a coruscating and vicious attack on Boris Johnson. He calls for the Tories to end their love affair with Boris: “charm can make us forget the dishonesty and recklessness that would be ruthlessly exposed if he became leader”. Parris has some very harsh things to say about Boris’s character and behaviour.

The Parris column circulated rapidly and widely on social media. His name was trending on Twitter for while. There was enough rapid reaction to his commentary for the Indy100 to produce one of its signature metacommentaries.

The Times column by Parris has been followed by one with a similar flavour – though with perhaps slightly less barely suppressed contempt – from Nick Cohen in tomorrow’s Observer. Cohen accuses the media of a “woozy indulgence” towards Johnson for which Britain could “pay the price”.

But these criticisms of Boris have not gone unchallenged.

Iain Martin at CapX mounts a defence of Johnson which, to my mind, isn’t quite as much of a defence as it first appears. Martin’s argument is that the Parris column is one symptom that the Cameroonian tendency in the Conservative party is “losing the plot”. It needs to be seen in the context of a coming Tory leadership battle. And as their worries over the possibility of Brexit increase they feel they have to try to undermine the credibility of its most charismatic advocate. Without Boris the Out campaign is pretty much nowhere. With him, it might just have the chance of carrying the day come 23rd June. So Boris must be undermined.

Martin revisits some longstanding, but nonetheless significant, questions – such as the extent to which a politician’s conduct in private should affect our opinion of their suitability for public office. For what it’s worth, I think it depends on what sort of conduct we’re talking about. While minor youthful indiscretions shouldn’t preclude someone taking political office (the “did s/he inhale while at university?” scenario) and a sinner should always be given a second chance, a well-documented lifelong track record of indiscretion, disregard for the truth and infidelity should, I would submit, at least give us pause for thought.

John Rentoul in a piece at The Independent argues that we should be preparing ourselves for Prime Minister Boris. And he observes that the savagery directed at Boris by pro-EU journalists like Parris has the opposite of its intended effect: it leads Rentoul to approve of Boris more rather than less.

Rentoul’s column also offers a different reading of Boris’s performance in front of the Treasury Select Committee earlier this week. Most of the commentary I have seen considered that Andrew Tyrie rather cruelly exposed Boris’s failure to master detail and his willingness to busk and exaggerate to the point of being disingenuous. Rentoul, on the other hand, tended to agree with Boris’s own assessment that he’d come off the better from the encounter. Of course, given that it depends on your perspective and evaluation criteria, both views could be valid.

I think Rentoul makes an important point. He notes that the type of exposé being attempted by Parris – which has an Emperor’s New Clothes feel to it – is rather hampered by the fact that many people already know what Boris is like. Most people understand that he is largely untrustworthy and will say whatever he thinks might get him closer to achieving his own personal ambitions of power. But he continues to be popular nonetheless. So the attempt to expose his manifold failings in this way may be entirely unsuccessful.

There has got to be some truth to this. Today I looked back at a couple of posts I wrote about Boris a while ago (on Boris the Eurorealist? and Borismania). I’d largely forgotten what I’d said. But on rereading the posts it is apparent that they make many of the points that are being made again today. That isn’t a claim to any great prescience on my part. It’s simply corroboration that much of the debate over Boris’s character is not new and not news.

On the other hand, you can find plenty of people online today suggesting that the sort of arguments being advanced by Parris are simply lies being propagated by the Pro-EU fraternity. So maybe the many people who are aware of Boris’s foibles live alongside many people who genuinely think he’s a great guy.

One intriguing question is whether Matthew Parris’s column today represents his opinion as an individual commentator, or signals the first salvo in a barrage of criticism to be directed at Boris. We’ll have to wait to find out.

If it’s the latter then BoGo’s opponents need to play the game rather carefully. Or they run the risk of gifting the Outers a further sympathy vote for Boris.

Prime Minister Johnson. Can you imagine it?