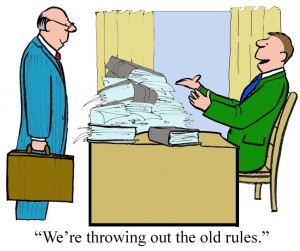 What is key to a successful capitalist economy? You might say clearly defined property rights. You might say a sound financial system. You might say entrepreneurs willing to take risks to innovate. You might even say a government that desists from strangling the economy with unnecessary “red tape” and inefficient tax-funded public production.

And you’d no doubt be right.

But let’s just pause on that last one. It is absolutely the case that the proliferation of unnecessary regulation can stifle an economy. But what is “unnecessary” is by no means self-evident.

It can be a matter of perspective.

Are health & safety regulations at work, for example, an “unnecessary” imposition, unduly constraining the discretion of entrepreneurs to run their business as they see fit? Or are they absolutely essential because they redress the imbalance of power between employer and worker, curb exploitation, and reduce injuries and deaths at work?

We live under a government very much wedded to the former view. But that isn’t the only view. And it isn’t necessarily the view that maximises social welfare, rather than the welfare of the 1%.

But more fundamental to a successful market economy – underpinning functioning property rights systems, a sound currency, and the rest – is trust and confidence. This is a more elusive quality of social relations. It is one that is not really captured very explicitly in economic analysis, apart from rather airy references to the state of consumer confidence in driving the macroeconomy. But it’s absolutely integral to the functioning of the economy.

It appears that our sagacious leaders are going to give us another opportunity to explore how important confidence is to the operation of a market economy, and what happens when it is eroded.

We’re going to be offered the opportunity in two very different areas of the economy. They may be the first of many as the Government continues its deregulatory drive.

Just before the Easter break the Government slipped out a consultation on privatisating the operations of the Land Registry. It follows relatively hot on the heels of the consultation about privatising the Land Registry conducted by the Coalition government. The Coalition concluded that privatisation was not advisable for a range of reasons. We can only conclude that the Tories weren’t keen on that outcome and are therefore having another go at it.

At the centre of this debate is confidence. Although it isn’t necessarily framed like that.

The functions of the Land Registry are rather dull, truth be told. But they are fundamental to the operation of the land and housing market. You can’t easily buy and sell property if it isn’t clear who owns what and whether it has been legally transferred between parties. This is typically seen as a government function because it requires impartiality and competence: it is a basic – and of necessity a monopoly – function, and it needs to be seen to be above the fray in order to give market actors confidence.

However, the Government, in its infinite wisdom, believes that the functions of the Land Registry would benefit from the injection of the profit motive. Yet, at the same time it appears to recognize the importance of confidence to the market. As I understand it, the proposal is to privatize operations but provide a government guarantee against mistakes by the private provider. Presumably therefore the expectation is that privatisation will lead to cost cutting and a drop in competence – so more mistakes will be made.

That looks like a one-way bet for whoever gets the contract. Another case of privatising the profits and socialising the costs. Nice work if you can get it.

The second development is in the regulation of food production. The Government has decided that statutory regulation is too intrusive. It is going to delegate to industry bodies the responsibility for regulating standards in relation to the conditions to which battery farmed chickens are subject. As more than one wag observed, the foxes have, quite literally, been put in charge of the hen house.

Industry representatives have been quick to endorse such a move. Of course they are.

We can’t dismiss out of hand the possibility that systems of self-regulation can deliver better overall levels of regulatory compliance. Certainly, compared to poorly implemented or inadequately enforced statutory systems there is the possibility for improved performance. That is the thrust of the argument in favour of so-called smart regulation. But it depends crucially on the nature of the regulated activity and the appropriateness of regulatory design.

A poorly designed and operated self-regulation system is quite likely to deliver worse outcomes than a statutory system.

Which situation are we are dealing with here?

Given the relatively low profile of the industry, the fact that the conditions under which production occurs are difficult to observe let alone verify, and the product market is highly price competitive, the incentives to cut corners are rather more obvious than the incentives for greater compliance and higher standards. So my working hypothesis would be that standards of animal welfare are going to decline.

The question is whether – or when – this will adversely affect the food produced. And if it does will that lead to greater risks of tainted meat entering the food chain? Will that in turn lead to a loss of confidence in the UK-produced foods?*

Clearly we can’t know yet. But these are not prospects with zero probability, so we should be alive to the possibility. After all, it was to stop certain undesirable industry practices that these regulations were put in place in the first place.

So we’re all going to be part of another big social experiment. Won’t that be fun.

None of this is to argue that nothing should ever change. Nor that there aren’t erstwhile state activities that could genuinely be handed over to the private sector, without the state having to provide a perpetual backstop against failure. But it is an argument against the presumption that private is always best. And it is an argument about the need for a more sophisticated understanding of the way economic institutions function, and the ease with which incautious “reform” can do systemic harm. An obsession with saving a few pounds in the short-term, or a susceptibility to the blandishments of industry interests, risks gradually eroding the foundations upon which the whole system rests.

So I suppose it is another plea for the application of thought rather than dogma.

* Declaration of (dis)interest: As someone who hasn’t eaten meat for more than twenty five years, and whose reasons for not eating meat are unrelated to animal welfare concerns, this doesn’t affect me very directly.