Is the quiet man about to turn up the volume?

… no one shall be enslaved by poverty, ignorance or conformity. 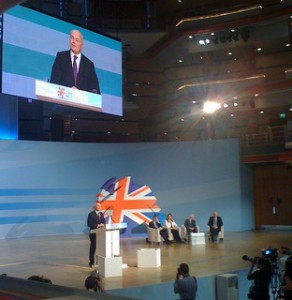 I have always taken the use of the term “enslaved” in the Preamble to the Liberal Democrat Federal Constitution to be figurative, given that slavery was formally abolished in England in 1833. But while reading yesterday’s Observer I was struck by the thought that perhaps we need to revisit the issue rather more literally.

Under the headline Coalition to step up its work-for-free programme Daniel Boffey and Toby Helm report that in the next fortnight Iain Duncan Smith is planning to launch an expansion of his mandatory work programme for long-term unemployed people. This plan is perhaps curious, given that there are signs that the current mandatory scheme is not delivering the expected outcomes. And this is occurring at a time when it appears that welfare to work more broadly is floundering in the face of the recession. Boffey and Helm report that:

Critics … claim the move is an indication of panic within government over the failure of ministers’ various schemes to tackle long-term unemployment, which is at its highest level for 16 years.

It wouldn’t surprise me if it was. Panic would seem a plausible – quite possibly understandable – reaction to the current situation.

It should also not come as surprise that a mandatory work scheme isn’t delivering on the outcomes claimed for it. The Department for Work and Pensions’ own research demonstrated the serious limitations of the approach a while ago.

The IDS approach to welfare reform is rooted in a narrative of personal responsibility. That narrative appears to be taking ever firmer hold. The piece on last week’s Newsnight in which Allegra Stratton questioned a young mother about her choices would have sat very comfortably alongside the US Republican onslaught against “welfare mothers” in the run up to Clinton signing into law the rather Orwellian Personal Responsibility and Work Opportunities Reconciliation Act 1996.

We can all agree that personal responsibility is a good thing. And if everyone were both willing and able to take responsibility for themselves and their family then that would no doubt significantly reduce the burden upon the state. But, as Robert Goodin observed a while ago*:

The question is not whether to praise those individuals who are shouldering responsibility for themselves and their families. The question is instead what we collectively should do, as a matter of public policy, when individuals fail to live up to that ideal. Simply reiterating the ideal cannot, in and of itself, resolve that question.

The question is whether a carrot or stick approach to labour market re-engagement is likely to be more effective.

The Government favours the stick: you are prescribed a period of working for no pay under the threat of having your benefit entitlement suspended. The Observer reports that the Government is looking to run a national pilot with the period in question being increased to six months.

The carrot might, perhaps, be to incentivise the long-term unemployed by deploying another of IDS’s favoured mantras: why not make work pay? The standard rate of JSA for a single person under 25 is £56.25 per week and for those 25 and over it is £71.00. A couple get to live like royalty on the princely sum of £111.45 per week. Someone over 21 working a 30 hour week at minimum wage would earn just over £180 per week. If the Government is going to force people to work in order to receive support from the welfare system then perhaps it would be appropriate for them to be paid the equivalent of the minimum hourly rate deemed to be socially acceptable. Or, indeed, legal.

If we are genuinely concerned that there is a generation of people languishing for life on welfare, then wouldn’t it do even more to fire their enthusiasm for employment to find out that they can be significantly better off as a consequence of participating in the labour market? It would represent an opportunity not an imposition.

Now, of course, there are all sorts of arguments about whether they would be likely to take home the minimum wage, if they were to enter the wonderful world of work full time, given the complexities of the tax and benefit system. But that is a question of calibration rather than principle.

In addition, our aspirations for labour market re-engagement need to be tempered by an understanding of the context. At the moment long-term unemployed people are likely to be out-competed for jobs by those who are recently unemployed and therefore job-ready. In a period of high unemployment beating unemployed people around the head with a stick may give some form of sadistic pleasure, but it is unlikely to do a great deal for either their self-worth or the unemployment statistics.

The British welfare system is decidedly ungenerous by international standards. It continues to operate with the principle of less eligibility not far beneath the surface, long after the Poor Law has been forgotten.

But in other ways the system has been transformed.

In the eighteenth and nineteenth century local merchants and tradespeople complained that they were being undercut and out-competed by the paupers put to work in the Workhouses.

In the twenty-first century it is more likely that some canny employer will see an opportunity to access free labour, provided under compulsion by the Government, in order to reduce the employee headcount and increase profits.

Unless, of course, an organisation has a reputation to protect, and someone is willing to make enough of a noise about the injustice of the situation.

I am curious as to how the Liberal Democrats will respond to these developments. Perhaps Ministerial moves to expand the scheme will shake the party out of its torpor. Without wishing to trivialise the term, it seems to me that forcing someone to work for six months at threat of having their entitlement to benefit suspended comes perilously close to being enslaved by poverty.

And I thought we were against that sort of thing.

Image: Community links via Flickr (under a Creative Commons license)