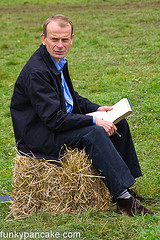 I’m having trouble getting this morning’s Andrew Marr Show out of my head. This is not pleasant.

There are two causes of this affliction, both relating to the interview with Iain Duncan Smith.

The first is the rather extraordinary approach taken by Marr. To call it the interviewer’s equivalent of underarm bowling would be too kind. It wasn’t so much that he didn’t seek to engage critically with any of the statements that IDS made. It was more that several of his questions simply rephrased Conservative policy and he then invited IDS to endorse or elaborate upon them. Not surprisingly, IDS did so. If Marr had rolled over and asked for his tummy to be tickled I wouldn’t have been surprised.

And IDS said plenty that demanded closer scrutiny. For example, Marr started by raising the issue of the accessibility of Universal Credit, given that it will be an online system. IDS made statements about the majority of those receiving benefits being able to use the internet and that the DWP were working with other agencies including local authorities and CABx to get everyone online. This would have the advantage of spreading ICT literacy, and hence employability, as a by-product.

At one level, this might all seem unexceptional; indeed, positive. Yet it seems it may, even in the DWP’s estimation, take several years to get to the point where most people can use the online system. So the obvious follow-up question was about this minority. How are those who are not ICT literate at the moment – or indeed are not literate in any way – supposed to cope with the system in the several years until they somehow acquire the necessary skills? There is clearly a risk of the most disadvantaged being disadvantaged further. Marr rather tentatively and indirectly raised this, but IDS swerved around it without answering.

And is the Government expecting unemployed people to treat their broadband payments as the No 1 priority so that they can continue to access the system? Even as benefit levels are eroded further and the costs of food, heating, and housing continue to increase? If not then there is going to be a heck of a demand for access points in public spaces. Better keep those libraries open. Oh dear …

But these issues went unprobed.

I’ve no idea whether Marr’s uncritical approach was because he is in agreement with IDS – in the past he has spoken of the need to be studiously neutral – or whether the BBC is running scared of interrogating Government ministers too closely for fear that ministers will retaliate by cutting funding, or worse. Whatever the reason, there is a desperate need for critical examination of the Government’s agenda in the mainstream media. But it isn’t happening.

The second reason the interview continues to afflict me is that it demonstrated once again how out of touch the ministers promoting these policies seem to be. We know this. But it is always painful to be presented with it quite so vividly. 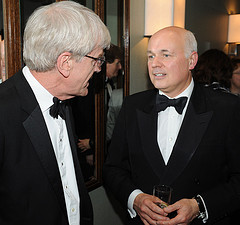 IDS was asked about the move to a single payee under Universal Credit. The risk here is that all the money could, for the sake of argument, now be handed over to the ‘head of household’ who will irresponsibly waste it. IDS didn’t seem to see this as much of an issue. He appeared to suggest that families will sit down and rationally decide among themselves who should receive the payment. Presumably this sort of discussion would take place over a light supper in the conservatory. Or something. Where there were disagreements within households there are going to be dispute resolution mechanisms.

IDS appeared to lack a firm grasp of how fraught and complex family dynamics can be.

He argued that his policy thinking around financial support – or lack of it – from the benefit system for any child after the second was all about responsibility: “choices come with consequences”. Don’t have children if you can’t afford to look after them. Here he betrays the misleadingly static nature of the thinking. There are people who work, are responsible, and can pay their way. There are people who live life on benefit. The latter should be disciplined for their fecklessness.

There is no understanding that poverty is dynamic and people move in and out of work. A family may well have been able to afford their third or fourth child at the time of conception, but redundancy or ill-health has adversely affected their circumstances. Should they be punished for their irresponsibility? It appears so.

And the familiar tropes were all present and correct. IDS repeated the mantra about the Government stopping people getting £100,000 a year in housing benefit. This is such a misleading representation of the housing benefit system, but it has been so effective in turning many people against those who receive it. He gave another airing to the parable of the everyman going off to work long hours who resents the family living at the end of the street, the curtains closed, and lots of children running about; by implication, living the life of Riley on benefits.

Divide and rule. Turn the poor against the very poor and hope everyone is distracted from the bigger picture.

Universal Credit is not, in itself, a bad idea. But it seems it is being designed for the world the Conservatives would like to believe exists, rather than the one that does exist.

Consequently the scope for spectacular policy implementation failure is considerable.

More importantly, the scope for inflicting unnecessary and unjust hardship on those who are already struggling is immense.

If you haven’t watched the interview then you can find it here, starting at 35m 46s, for the rest of the week.

Just in case he encounters this piece, for clarity I’ll note that I’m not pimpled, single, bald, cauliflower-nosed, sitting in my mother’s basement or particularly young. Whether I am seedy or socially inadequate is for others to judge.

But I am very angry.