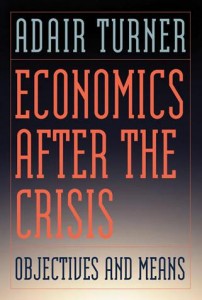 A little late in the day I’ve just finished Adair Turner’s Economics after the crisis: objectives and means, published in 2012. It is based on Turner’s 2010 Lionel Robbins lectures.

Economics after the crisis is a thoughtful book which makes a number of relatively simple but profound points.

The early pages note some of the findings emerging from the literature on happiness. In particular, it examines the paradoxical finding that there is an apparent disconnection, once national income per head reaches a certain level, between further rises in average incomes and reported levels of happiness. More money on average doesn’t appear to make people happier.  Turner notes some of the mechanisms that could generate this finding. He notes that trends towards increasing income and wealth inequalities, which seem to accompany market-based economic growth, exacerbate the problem.

These empirical results present a challenge to simplistic views about the desirability of pursuing economic growth as an overriding policy objective. Turner argues that a proper understanding of the conventional economic arguments means they don’t justify the policy anyway. It is a radical simplification of these arguments that gets used to justify simplistic policy prescriptions associated with uncritical marketization.

The book then considers the contribution of the financial sector to the economy. Turner notes the distinction between creative and distributive economic activities. The latter are closely allied to rent-extraction. His argument is that while increasing financial complexity and deepening of capital markets brings advantages, the financial sector has strong tendencies towards distributive activity which contributes little of real value to the economy. For example, resources expended on tax or regulatory arbitrage add a limited amount to the sum of human welfare. They are largely aimed at keeping money in the pockets of the already wealthy by subverting public policy objectives. Once the financial sector exceeds a certain scale and complexity it ceases to be beneficial because it becomes dominated by distributive activities. That point is reinforced if these activities bring with them increased volatility and downside risk, privatising profits and socialising losses.

One might think from this Turner is anti-market or anti-capitalism. Yet that is emphatically not the case. He argues instead that we need to rethink precisely what the benefits of a liberalised market economy are. His focus is on maximising human welfare, which isn’t necessarily the same as maximising growth. He argues that market economies should be valued because they are the best mechanism we know of to deliver economic and individual freedom. That is a sort of deontological argument – freedom is the goal in itself. Turner also feels that because we know that losses affect people’s welfare much more than gains, policy should concentrate on seeking to minimize the risks of involuntary unemployment.

If maximising freedom and minimising the risks of involuntary unemployment delivered economic growth then that would be welcome. But the pursuit of growth, as conventionally measured, isn’t the primary goal, particularly if it is accompanied by increased inequality, which impairs happiness, and a greater proportion of economic activity directed towards unproductive rent-extraction.

Turner also argues that policy needs to take a critical stance towards certain types of financial innovation. If complex financial products are designed to generate or exploit increased volatility and therefore imply a continued significant and systemic risk then governments should be willing to say no to their implementation. Governments should be willing to say the costs of such innovations outweigh the benefits to society. Just because it is possible, doesn’t mean it is a good idea. Conventional justifications for innovations on the basis of  the self-evident desirability of market completion should be rejected because they misunderstand or misrepresent the arguments.

That speaks to a broader theme, which Turner brings out in the last chapter. He is strongly of the view that some of the challenges we face flow in part from treating economic questions as if they were technical questions with precise technical answers. This ignores two things. First, it ignores Keynes’ point that economic affairs are subject to unavoidable and irreducible uncertainty.  Second, it assumes that you can have policy without politics. Turner, in contrast, argues that some of the key issues we face – for example, what should be the objectives of policy and how much inequality is tolerable – are irredeemably political. It is a political act to create the illusion that they are technical questions.

This leads Turner to the conclusion that economics as a body of knowledge has taken something of a wrong turn. More specifically, we need to rediscover the broader sensibility of the classical economists. They did not treat economics as a neutral science. Rather it was a body of knowledge infused with values. Nor should economics be isolated from other strands of  social thought. An adequate understanding of the economy could not rely upon ‘economics’ alone, but needed to be informed by a whole range of disciplines including history and philosophy. That is a rather different position from the thinking associated with contemporary “economic imperialism” – that other bodies of social scientific knowledge can be significantly enhanced by being turned into pale imitations of economics itself.

Turner’s position resonates with much of the debate that is taking place at the moment. This might be summarized as the view that we need to move away from “economics” as it has been practiced for the last several decades and return the older notion of “political economy”. But even that may not be a sufficiently broad perspective. Turner approvingly cites John Stuart Mill’s famous observation: “a person is not likely to be a good political economist who is nothing else” .