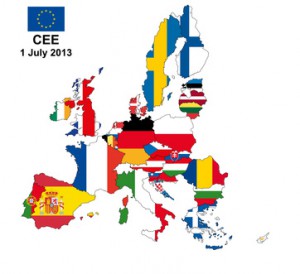 illustration of european union map with flags, from 1 july 2013

Like many others, I’ve been mesmerised by the news since last Thursday’s narrow referendum win for Leave. The pace of events has been extraordinary. You feel like if you nip to the shops for an hour it is almost guaranteed that you’ll miss some further seismic political event while you’re out. For political nerds it’s like Christmas, New Year and your birthday all rolled into one. If it weren’t so seriously alarming.

There has been oceans of commentary already, discussing whether the Government is obliged to automatically follow the Brexit result, whether the result needs to be ratified in Parliament, whether a General Election should be called to establish a clear mandate for Brexit, or whether it should put it to a second referendum when the terms of leaving become clear. There have been suggestions that Brexit won’t happen, at least not in the near future, or that Britain will keep kicking the can down the road until we pretty much forget about it.

As time passes it feels like things become a little clearer.

A second referendum on the basis of the same badly-framed question as the first seems pointless. It just feels like sour grapes from Remainers – we’ll keep going until we get the answer we like. However, there is no reason why the Remain side should shut up and accept the result. After all, the anti-EU contingent has spent decades noisily not accepting the result of the 1975 referendum.

On the other hand, a referendum on a different question – assessing the terms upon which the UK would leave the EU and the type of post-Brexit relationship to be established – would be a different proposition. It might bring clarity. But do we have any evidence for thinking that it would be conducted any less mendaciously than the one that we have just experienced?

Personally, I wouldn’t have a problem with the Government putting the Brexit result to a vote in Parliament. The referendum result is advisory. It would be legitimate for it to be confirmed (or not) by the process recognised as at the heart of our representative Parliamentary democracy. Leave campaigners wouldn’t like it. That is, of course, because they fear the vote would be lost. However, I find this position incoherent. If the whole point of Brexit is to ‘take back control’ from the evil EU and restore it to Westminster, so we can make our own decisions, then how can you object when Parliament exercises sovereignty? It’s illogical. But then I don’t suppose that would stop the argument being made.

The other argument is that the Conservatives promised in their manifesto that it would follow the referendum result. So it has to trigger Brexit. But I don’t buy that argument either. For all sorts of reasons Governments – not to mention Leave campaigns – disregard all sorts of promises they put in their manifesto, without compunction. In some cases they even disregard promises because mature consideration suggests that what they had been proposing turns out not to be a very good idea.

But some of these debates have been rather overtaken by events. Whether the Conservative leadership goes to Theresa May or Michael Gove it appears unlikely that either will go to the country to get their own mandate. In a world of fixed-term Parliaments they are under no obligation to do so. It seems unlikely that they’ll rush to test the referendum result in Parliament. Both have indicated that they are in no hurry to trigger Article 50. But it seems to me that motivations here are different. I have no doubt Gove wants to leave Europe. He is a zealot on the point. So for him it may be a question of timing. May, on the other hand, while absolutely authoritarian on questions of immigration, feels like someone who is not so much of an obsessive that she’d ignore the bigger picture entirely.

Quite apart from the difficult political questions around the break up of the UK and the risk to peace in Northern Ireland, it seems possible that if the various Conservative factions stop blustered and bullshitting and look hard at the process of Brexit they will realise quite how catastrophic it will be for the UK economy. The intervention by Cecilia Malmstrom yesterday should – if there is any scrap of rationality left in the political world – help to focus minds.

There is much talk among the Leave camp about negotiating favourable trade deals with the rest of the world or the desirability of EEA, possibly EEA+ or EEA-. Since the start of the campaign it has been obvious that most of this talk ignores the constraints and imperatives of regional and global politics. There is an assumption that UK holds some good cards or that the EU will have to offer us a good deal because, hey, we’re “Great” Britain or that the EU wouldn’t be so spiteful as to punish the UK for its betrayal.

Even if you don’t accept that any and all of these assumptions is erroneous, it is important to appreciate the technicalities of the Brexit process. This is where the Malmstrom intervention is salutary. She pointed out that the UK remains a member of the EU until the Article 50 process has been completed and that EU member states are prohibited from engaging in bilateral trade negotiations, on the one hand, and that it is impossible for the EU to negotiate with itself, which is what discussing trade deals with UK before Brexit would mean. Unless the UK wants to go rogue, from a legal perspective it will have to leave the EU first and then start negotiating trade deals as a third party. It’s a reasonable working assumption that such trade deals would take five-seven years to negotiate. In the mean time UK goods and services are likely to be traded under disadvantageous WTO rules. Much has been made of trade tariffs under this arrangement, but, as has been set out very clearly here, it is non-tariff barriers that will be ruinous. They will absolutely kill UK exports into the EU. And at the same time UK exports to the rest of the world will be at a huge disadvantage until trade deals are signed.

So in addition to the negative shock the UK economy already faces as investment stalls and disinvestment starts, that will intensify during the period Article 50 is active, the UK will likely face a period of years during which it will be trying to trade with the rest of the world on terms that make it uncompetitive.

The Article 50 process, and the system of rules that it is embedded in, is designed to make life very difficult. The UK was involved in designing the system, just as much as any other country. Indeed, the process means that no one would trigger it unless they were willing to risk paying a extraordinary economic price. Indeed, some might be tempted to say no one in their right mind would trigger it if they understood the consequences. Those with their eyes on the sunlit uplands of a free independent country need to recognise that there is a substantial risk that the country will fall into a crater a long time before it even reaches the sun-dappled foothills.

This isn’t talking Britain down. It’s not Project Fear. It isn’t to belittle the concerns that led to citizens voting Brexit or to disregard their aspirations. But this isn’t time for more glib sloganeering: “We’re Great Britain we’ll be alright”, “We’ll sort it out”, “Let’s make Britain great again”. That time has long passed. This is time for understanding the great peril of the Brexit route. To grasp the price that will be have to be paid – by all of us, and our children, and very probably our children’s children – in pursuit of benefits that will prove to be largely illusory anyway. And maybe if that was more widely understood then even more of those who voted leave will decide that perhaps, on mature reflection, leaving isn’t such a great idea.

Then we’d have to deal with ‘non-Brexit’. Which will present plenty enough problems of its own.

Note (01/07/16)
This, by Spinning Hugo, examines the likelihood of triggering of Article 50 from a number of different angles and concludes that it’s quite possible that we find ourselves in a situation where “no responsible government should invoke Article 50”. That’s plausible. It invites us to reflect on whether it’s likely that a post-Cameron Conservative government will act responsibly.