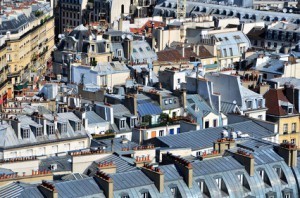 Yesterday I was back up in that London to attend an event exploring UK housing policy. Many, of not most, of the luminaries of UK housing research made the same journey. The event covered quite a lot of ground, but at the same time the agenda was relatively narrow – focusing as it did on the macro, credit, housing supply, planning nexus. The discussion left me with plenty to think about and there is no way that it could be meaningfully summarised in a blog post. So here are a few quick reflections – not all of which flow from what was actually discussed on the day.

Three of the biggest challenges we currently face in housing are not technical policy challenges. They are perspective, purpose, and politics.

Why do I say the biggest challenges are not technical? Because when it comes down to it there is a reasonable degree of consensus about what needs to be done to make the housing system function better.

For example, the theoretically correct way to tax housing has been clear for a long time. There isn’t really a great deal of argument about whether taxes should be neutral between tenures and asset classes. It is agreed that taxes with a slab structure, like stamp duty, create unhelpful distortions around thresholds. We largely agree, anyway, that it is better not to tax transactions.  The Mirrlees review helpfully restated some of the principles clearly a few years ago. But in terms of what it actually said it wasn’t news out of the blue.

Similarly, among those who think seriously about housing there are few Telegraphesque defenders of the Green Belt come what may. Protect land of particular value, for sure, but don’t start from the presumption that because it currently has Green Belt designation it is uniquely worth keeping.

We know that the current planning system, particularly in the era of localism, privileges insiders and current residents. Those who would benefit from new development are much more difficult to represent in decision-making processes. Their interests cannot easily be concentrated into an effective lobbying campaign, especially if they are not yet born.

There is broad agreement that if you are going to think about housing markets sensibly and intervene effectively then you need to think about the issues in the context of broader dynamics of economic change and spatial development. What is happening to infrastructure, what is driving industrial agglomeration or otherwise, these are important forces shaping where housing is needed, or no longer needed.

We also have a pretty good idea what happens in other countries, but doesn’t happen in the UK, and which delivers more reliable and affordable housing supply. Proactive public sector site assembly and preparation, for example, based on strategic assessments of residential development needs in relation to infrastructure or economic growth.

Most analysts agree that we shouldn’t be spending bucketloads of cash on housing benefit and should be spending more on provding subsizing housing, but we might differ on what form that subsidy should take, how long it should be available for, etc.

And so it goes on.

Of course there are areas of disagreement – Is planning alone the problem? Is the increasingly oligopolistic construction industry culpable or is it just a hapless victim of dark bureaucratic forces? – and, in the background, agreement that it is all jolly complicated. But I’m not sure that’s fatal to making progress.

So why do I see perspective, purpose and politics as the challenge?

Ever since I have been involved in housing policy research, which is rapidly approaching quarter of a century, there has been a concern that policy is formed in Westminster and Whitehall on the basis that London’s problems are the problems that matter and/or they generalise straightforwardly to the rest of the country. That might be slightly harsh, but it’s in the right ballpark.

There is now, to be fair, much greater recognition that housing markets are local not national. But even so there is still a tendency to think that the key housing problem facing the country is housing supply in London and its commutable environs. That is surely a problem, but it is a very different type of problem to those in other parts of the country. More importantly, it is important to recognise that housing policy is a devolved responsibility and the devolved administrations are pursuing varied policy trajectories on the basis of different assessments of precisely what the key challenges are.

The fundamental reason that housing is achieving a higher profile in policy thinking is precisely because of its demonstrable implications for the macroeconomy, its central role in the global financial mess we’re in, and the drag that a dysfunctional housing market places on the performance of the economy. The recognition of this significance has led a different group of analysts, with a different set of interests, to turn their attention to housing.

When we think macro, credit, housing supply, planning we inevitably reach for the tools of economics. I’m not going to say that those issues aren’t important. They are profoundly important. And the tools of economics have plenty to offer in thinking about the issues. But there is always the risk that the economic sensibility means we talk about housing and housing finance in the same terms as other asset or credit markets. We want to apply the models we’re familiar with to a new set of problems. The discussion might as well be about equities, bonds or investment in pork belly futures.

Housing most definitely has the characteristics of an asset, not least because several decades of financialisation of the system has made it so. But that is, first, a problem in itself and, second, not really the main point. Housing is about shelter and security; it is about rights, family life and human flourishing. Only secondarily, if at all, should it be thought of in terms of investment, speculation and accumulation. For one thing, focusing on house prices, mortgage credit, wealth accumulation and the like means that we risk neglecting the issues facing the large proportion of the population who will never come within touching distance of even partial home ownership.

We need to ensure that in focusing on the big picture we don’t lose sight of the bigger picture.

Finally, the biggest problems facing housing policy at the moment relate to politics. Or, perhaps more accurately, to political economy. We, broadly speaking, know what to do. The problem is that politician won’t, or perceive that they can’t, do it. The recent paper by the Institute for Government is a further contribution to the argument about the way in which electoral arithmetic shapes how the political system responds to housing problems.

If anything the political economy has become even more intractable as a result of recent policy. For example, now that the Government has a substantial investment in the housing market through its Help to Buy policies it has an incentive to keep house prices high so as not to realize a loss on its investment. So you can add the Government to existing home owners, mortgage lenders and institutional investors as stakeholders with a strong interest in maintaining the status quo. 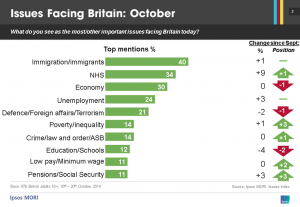 But perhaps even more urgent is the question of where housing problems sit on the political to-do list. Coinciding with yesterday’s event Ipsos-Mori released its latest survey evidence on what matters to voters. Housing doesn’t make it into the top ten. So it is not surprising that politicians won’t treat it with priority.

Fundamentally this suggests to me that those who are passionate about housing and understand that it sits at the root of many other social problems have yet to make the case. Housing is interconnected with all sorts of problems in all sorts of complex ways. That makes the story difficult to tell. But until it can be told in a way that means a substantial proportion of voters take notice then it is not surprising that politicians obsess about other things.