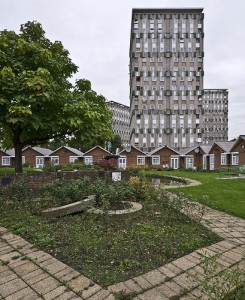 And now it looks like those rumours are well-founded. They’ve only gone and done it.  The Conservative manifesto pushes the Policy Exchange line that local authorities should be forced to sell high value properties in order to fund building new properties in lower value areas, and, if elected, they are proposing to extend the Right to Buy to housing associations. This opens up the possibility of an extra 1.3 million households having the chance to buy their home at a discount.

This is supposed to be the Conservatives’ big offer. Although, to be fair, it would seem to be a big offer targeted at a relatively small group of people – housing association tenants who earn enough from stable employment to be able to afford a property which, even at a substantial discount, is going to be a financial stretch.

It would appear that one of the ‘clever’ aspects of the Conservative policy is to link the two elements in order to try to neutralise the second legal problem. The proceeds from selling the local authority properties will be used in part to compensate the housing associations for the market value of their properties.

In the process that seems to undermine the core of the original Policy Exchange justification for the policy – that if you sell off high value properties you are able to meet a greater proportion of housing need because you are replacing them by building more lower value properties to house more households – but never mind.

Members of the housing policy community are very actively offering a range of other reasons why the policy is a bad idea. These include pointing out that  we need to recognize the consequences of Mrs Thatcher’s original Right to Buy. While it certainly benefitted a lucky cohort of households, it brought with it a whole range of housing market problems including the residualisation of social housing, spatial segregation, and an increase in housing benefit expenditure as ex-RTB properties were not maintain in owner occupation but turned into profitable private rented property. The new version of the policy would seem to be designed to drive a similar process of socio-spatial polarization. Indeed, it is explicitly part of the policy rather than an unfortunate byproduct.

The new policy also risks undermining private lenders’ confidence in the housing association sector, creating problems with asset cover for existing loan commitments, and causing housing associations to rethink and scale back their development plans. The policy is likely to be perceived as grossly inequitable between housing association tenants, who stand to gain a substantial windfall, and the increasing number of aspiring home owners who are stuck in private renting because of affordability problems, who will get nothing.

The Conservatives’ claim that it will be based on one-for-one replacement of properties sold should be treated with extreme scepticism because their current extension of the Right to Buy was based on the same claim, and in practice local authorities are managing to replace at a rate more like 1:11. This is inevitable given both the subsidies on sale and the Treasury’s claim over a large chunk of the sales receipt, set alongside the costs of building anew. Unless the financial terms of the new Right to Buy are very different from existing schemes then the 1:1 claim has no credibility.

There are several other reasons one could invoke to highlight the problematic nature of the policy. The broad point, though, is that if one were serious about meeting housing need this isn’t the route one would go down.

But that is, I guess, the big sticking point. The housing policy community are engaging with the idea as a housing policy. Thought of in those terms it is a desperate policy that one might hope would sink under the weight of its own complexity.

But you sense the Conservatives aren’t thinking about it first and foremost as a housing policy. The fact that it might threaten the existence of housing associations as independent entities, increase social polarisation as poorer people are cleared from higher value areas, and does nothing to very much to meet housing need is largely beside the point.

The main question for the Conservatives is whether this policy offer is enticing enough to get sufficient working class voters in marginal constituencies to put a cross in the Conservative box on May 7th. It is a political calculation that is, most likely, impervious to the logic of the counterarguments.

You’d like to hope that good sense will prevail. But I’ve no confidence that it will. It feels a bit like we’re in bedroom tax country here. Before the bedroom tax was implemented the housing policy community identified a range of problems that it would bring in its wake. Most of those predictions have turned out to be true – and there have been further problems that perhaps no one anticipated. But that didn’t stop it happening. The fact that Iain Duncan Smith is one of the champions of extending the Right to Buy should be salutory: it doesn’t matter how wrong-headed a policy might be it could still be implemented.

But, of course, this may not be a policy that the Conservatives are expecting to implement. So all the technical and legal objections are rather beside the point. This may just be a pitch to attract enough votes to scrape over the finish line as the largest party – in the expectation that any coalition negotation will see the policy dropped because no other party is likely to support it in this form. If that is the case then it probably falls into the category “politics at its most cynical”.

Image: via flickr.com under Creative Commons.