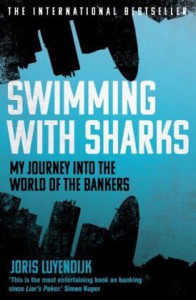 I spent much of Boxing Day reading, perhaps a little belatedly, Joris Luyendijk’s Swimming with Sharks: My journey into the world of the bankers. It’s a book that has featured on one or two lists of books of the year. The book is based on around 200 interviews conducting between 2011-2013 with people working in the financial sector: investigative journalism informed by Luyendijk’s anthropological training. A good chunk of the interviews appeared as part of Luyendijk’s banking blog at the Guardian. But for the book they have been assembled into a clearer narrative.

His aim was to enter the word of the City of London, with few preconceptions and little knowledge of finance, in order to discover not just more about how the world of finance works, but also how bankers could live with themselves after having brought the global economy so close to imploding in 2008.

Luyendijk’s narrative is a journey of discovery, as he realises that to talk of ‘bankers’ is too simplistic. The financial system involves a whole raft of different organisations and roles. In the course of the journey it becomes clear that many of these roles involve doing useful things. The idea that the entire financial system is parasitic upon the real economy is difficult to sustain. At the same time Luyendijk does a good job of debunking the idea that ‘greed’ is the dominant driving force, and that it is greed that pushes bankers to take unreasonable risks with ‘other people’s money’.

The argument is not – and could not plausibly be – that greed is absent.

Rather, the claim is that greed is not the primary motivator for many. Instead Luyendijk develops a typology of those he encountered in the City. At one end of the scale are the ‘teeth-grinders’ who dislike what they are doing, know it is at times morally dubious, but feel trapped. Some are driven by competitiveness and status concerns; money is the means of keeping score. At the other end of the scale there are the ‘cold fish’ who know exactly what they are doing, but are the epitome of the ‘amorality’ that is encouraged by the incentive structures they face.

But Luyendijk’s bigger claim is that to focus on behaviour – whether it be in the form of ‘a few rotten apples’ or broader organisational culture – is to completely miss the point. The problems are integral to the systems and structures of the industry. It is about a focus on maximising short-term shareholder value. It is about a brutal survival-of-the-fittest hire-and-fire culture. It is about relentless innovation and increasing financial complexity aimed at extracting maximum margins from the unwary or ill-informed. Anything is permissible as long as it isn’t technically illegal. It is about a system that demands huge commitment from employees – to the detriment of their lives and relationships beyond work – whilst showing no great loyalty to those same employees, treating anyone who doesn’t have a job-hopping CV with suspicion. It is about a code of silence, rampant conflicts of interest in every direction, and organisations that are not just too big to fail but too big to manage.

And none of these problems have been meaningfully addressed since 2008. The big banks – and the Government – would like everyone to buy the argument that everything is sorted and we’re back to business as usual. Luyendijk’s point is that while this may well be true, that is precisely the problem. A financial system that continues without more fundamental reform will deliver another crash. It is a question of when rather than if.

Luyendijk tells a good story and paints a bleak picture. How much of the story comes as news to the reader depends on where they are starting from. I don’t think I came across anything in the substance of the argument that I hadn’t encountered elsewhere.  But then I have probably read rather more Select Committee reports and suchlike on this topic than the typical reader. I did enjoy the way in which Luyendijk humanises the story. And his more fine-grained reading of the motivations of those working in the City is helpful.

Luyendijk is also candid about the challenges of conducting this piece of work. Because of the City’s code of silence it is difficult to access interviewees and most would only talk on condition of absolute anonymity. This inevitably makes it difficult for anyone to crosscheck the story. Some defenders of the City have argued that it is only those who have been treated badly by the system, or those with a grudge, who would want to speak to Luyendilk. He counters this with the argument that many of the stories recurred among the interviewees, and many of the structural characteristics that are at the root of the problem are well known and not contested. What his work does is join the dots and shed light on the human dimension.

Perhaps the most interesting chapter for me was the final chapter – The Empty Cockpit. Here Luyendijk reflects on why there has not been more far-reaching financial reform following the near-death experience of 2008. He notes there are peculiarities about where we find ourselves. When Andy Haldane observed that the balance sheets of big banks were still ‘the blackest of black holes’ this didn’t trigger any great furore. For journalists who tend to work on the premise that bringing a problem to light, and demonstrating it is bigger than most people realise, should be sufficient to trigger action the whole situation is perplexing.

Luyendijk argues that this is not simply a question of ignorance. The problems are well-known to those who should know. He concludes:

The problem goes much deeper: the sector has become immune to exposure.

For journalists this state of affairs means, I think, that we must try to make the world of finance accessible to outsiders. More people need to understand how dangerous the global financial sector still is, how in 2008 it took us to the brink and that the deeper causes of that near-catastrophe have not been tackled. (p.252)

He then goes on to note the further problem of the capture of the political system by the financial system. Be it be directly through legitimate ‘campaign contributions’ or ferocious lobbying, or through enticingly lucrative post-political positions and speaking engagements awaiting individuals – of whichever political allegiance – who do the right thing while they are in office, the political system bends to the wishes of the financial interest. The reforms put in place following 2008, even though rather modest, are already being rolled back as politicians spend time having their ears bent by banking lobbyists. How much persuasion they require to remove protections that have only just been put in place to protect the rest of society from financial mayhem is something we can only speculate about.

This political powerlessness in the face of global finance is infuriating and raises the question of whether globalisation is ever compatible with national democracy. How are we to bring the global financial sector under control, without a legitimate global government? And if you believe such a global government to be unfeasible or undesirable, does this not imply that globally operating financial institutions of a size and power that dwarfs national governments are untenable, too?

But Luyendijk is not cynical about the political system, because it is the only route to change:

Nobody is helped more by cynicism about politics than cynical politicians. (p.262)

The question is: who is going to take up the challenge of building a movement for change? How can we fill the empty cockpit?